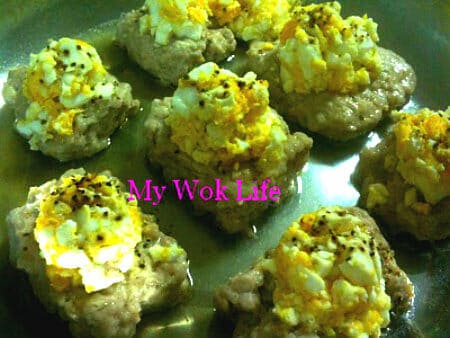 This dish is similar to my previous steamed minced pork with salted eggs recipe, but this one tastes fuller than the other due to the addition of Tianjin preserved vegetables (aka ‘Dong Cai’ 冬菜) in it. And, I think this looks better in terms of presentation as I tried making it to resemble the mini treasure boxes on the plate. It is great to cook this during Chinese festive like Mooncake festival, Dumpling festival and even Chinese Chap Go Mei (Lunar Fifteenth Day of CNY), to make it a symbolical festive dish with the name of the recipe I have it here.

This minced pork dish goes well with both steamed rice or rice porridge. I liked it with the rice porridge as its strong saltish taste complements the bland rice porridge so well. Loved also the fact that it looks delicate and tastes tenderly soft and smooth.

Method
1) Steep Dong Cai in a bowl of tap water for 10 minutes. Drain and squeeze dry. Pat it dry again on kitchen towel. Set aside. Season minced pork well with the listed seasoning, for at least an hour. May keep the marinating pork in refrigerator before cook.

2) Boil salted duck egg in a pot of boiling water, for 8 minutes, till egg is hard boiled. Remove from pot, let eggs cool before peeling the shell. Chop to mash salted egg. Set aside.

3) When ready to steam the pork dish, add Dong Cai and corn starch into seasoned minced pork and mix well. Lay and lightly press the minced pork mixture evenly on a lightly floured large square plate, to about 1″ thick. Divide minced pork into about 10 squares. Gently remove each square from the plate and transfer over to a large flat metal or porcelain plate. Arrange the squares nicely on the flat dish leaving some gaps around each square.

4) Use your thumb to gently press on the middle of the pork square to create a shallow well. Then, scoope a small amount of mashed salted egg with the melon scooper and top it in the well of the minced pork square. Sprinkle some coarsely grounded black pepper. If opted, sprinkle also a little bit of the finely shreded ginger and  red chilli, for better colour presentation and slight spicy flavour in this dish. Repeat step till all squares are done.

5) Place pork dish in steamer or on the wire rack in a wok half-filled with boiling water over high heat, cover lid and steam for 10 minutes. Heat off and serve with steamed rice or plain rice porridge.

A portion (about 2 squares) of my steamed minced pork with Dong Cai and salted egg counts about 255kcal.

Tips: Use coarsely minced pork instead of the usual finely minced type to yield fuller bites in the palate, if desired. Simply get the butcher to grind the pork meat only once  instead of twice, with the pork grinder machine. Or, chop the pork chop at home, with chopper, till the meat turns coarsely minced.