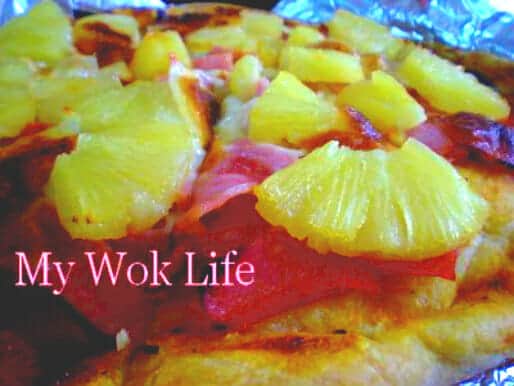 Pizza making is fun and easy. Perhaps, we have much influence by Pizza Hut, I love pan pizza (thicker crust) than original Italian thin crust pizza. So, the first pizza I made here was also pan pizza. Pizza-making may look deceptively comlicated, but it’s not so, in fact. I had this thick crust pan pizza made from scratch, and it was pretty successful in term of its appearance and taste, even by a first timer, like me.

The toppings used in Hawaiian pizza pretty much presenting the tropical flavour as this tropical fruit, pineapple, is used in it (to make it more convenient, canned pineapple is good). Hence, Hawaiian is named for this pizza (even though it’s not a Hawaiian invention), to denote the warmness and hospitality of Hawaiian, I believed. It’s named after the tropical characteristic rather than referring to the taste of any locally flavoured topping of Hawaii, neither the ingredients that typically produced in Hawaii. If you are a buff of Pizza Hut (or other pizza restaurants), you’ll understand how does Hawaiian pizza like (smile). Yes, this is the popular Hawaiian Pizza!

Pizza making saves time and effort, too. One time of pizza making, you can have at least 2 pizzas made at a time. If your oven can accomodate only 1 pizza baking at one time, store the remaining pizza base (and pizza sauce) in the freezer up to one month! Roll out pizza dough, and freeze. Place plain pizza base on pan in the freezer until solidly frozen. Transfer frozen dough discs to a zip loc bag, or wrap tightly in foil. When you need it, remove from freezer and let it rest for 10 minutes before topping.

It’s ok if you do not have a pizza peel and pizza stone in your oven to bake your pizza at home, so do I. I do not even have proper metal pizza pan, and I used disposable aluminum foil pizza pan to bake it. Result was as good (smile).

I did this pizza for lunch at my family picnic last Sunday. It was so cool to have the homemade pizza at the breezy sea side pinic event… Since June holiday is around the corner, bake some pizzas for your up-coming picnic, then!

Method
1) To make pizza dough: Combine flour and yeast in large mixing bowl, add water and briefly mix with spatula or wire mixing spoon. Then, add in oil, and mix all ingredients well. Add enough flour (the extra flour should be added by teaspoons) to make soft but not-too-sticky dough.

2) Knead dough with bare hands until soft and elastic, about 5 – 10 minutes. Knead dough either in the large mixing bowl or on lightly floured table top. You may also pick up the dough and knead it using both hands, coat your palms with some flour as and when the dough appears a little sticky.

3) When dough is formed, leave it in the large mix in bowl and cover with cling wrap. Let dough rise at room temperature for about 1 hour. The dough should be doubled in size.

4) In the meantime, prepare pizza sauce!

5) When it has risen, ‘punch’ the dough on lightly floured table top to deflate. Dough should remain soft but pliable.

6) Divide dough into half. Roll out each half into 8 or 9 inch circle with ½ cm thickness, using wooden roller. You may also use your finger tips to pat the dough to form a nicer circular shaped pizza base, and to push it out a little to the edge to create slightly bulgy crust around the circle.

7) Lightly grease the surface of pizza base with a thin layer of olive oil. Then, spread a thick layer of pizza sauce, followed by topping of generous amount of ham, pineapple chunks and Mozzarella cheese dices, on the entire surface evenly. Place whole pizza on a lightly greased pizza pan (stainless steel or disposable aluminum pan), if you do not have a pizza baking stone at home.

8) Preheat oven with 200C for 10 minutes. Place pizza in the middle rack of oven and bake for 20 minutes, till crust lightly browned and cheese melted. Serve warm.

To create more cheesy taste: Once pizza is baked, remove pizza pan from oven. Sprinkle some grated parmesan cheese on top, and let it melted with the remaining heat after baked. It’s optional.

Add also some chicken meat, bell pepper (capsicum), tomato, and/ or onion, to make it a premium one. You may even change to your desired toppings, as your wish. There’s absolutely no hard and fast rule for any homemade goodness!