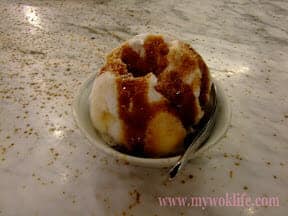 “Our 2-day FOOD Trip in Malacca..was so recharging!”

Hello! Malacca!
We visited Malacca over the weekend.

This was our second short getaway within the year. From SG to Malacca, it took around 3 hours bus journey.

As a self claimed traveler, not so a tourist (><), we always had our extensive research and detailed itinerary planned out, for every single trip, long and short, and aimed to fulfil each and every programme set out in the excel sheet. Without disappointment, we indeed fulfilled all our planning, for food and visits. Certainly, it was the food that matters the most to me! :) The best experience from this trip was gotten to try Malacca local delicacies and specialites food like Chendol, Satay Celup and Chicken rice ball.. Good old yummy food!

Among all the delicacies, I liked the Satay Celup the most…. Satay Celup, a unique delicacy of Malacca. A dish where a wide varieties of raw and semi-cooked seafood, meat and vegetables on skewers are dipped into a pot of boiling satay gravy placed at the center of the table. It worked like steamboat.

Not sure if you had the same question in mind, when I saw the service attendant carried out a pot of satay broth, I was concerned if it was a fresh of pot of broth base or……? Well, when the attendant served a pot of satay gravy on our table, she mixed the grounded peanut and brown sugar before our eyes. This somehow cleared our doubt. Nope, it wasn’t ‘recycled’.. Phew…. Haha.

We waited for the satay gravy to boil before placing our skewered food into the pot to cook. Each stick priced RM60 cents, with choices of prawn, chicken, pork, hot dogs, pig and chicken organs, beancurd skin, fried fritters, “kang kong”, and etc. By the way, the pot of satay sauce was complimentary to your orders.

This was our first dinner of the trip. Lucky enough, we spent merely 20 mins to queue before gotten a table. Heard that queuing for hours wasn’t something unusual on most of the days!

Afterwhich, we went to Jonker street’s night market which only opened every Friday and weekends, to taste the famous Chendol with thick Gula Melaka syrup. We also had a short shopping at a new Megamall, Pahlawan, before experiencing a 25 min non-stop firework celebration.
It was beautiful… reminded me of our first trip to Disneyland in LA, where they celebrated their 50th Anniversary with firework as the closing ceremony. Nice~

The next morning, before setting off for sightseeing, we stumpled upon an old-fashioned coffee shop in a small lane accross the Hotel Equatorial. An ever-seen traditional old coffeeshop seemingly rundown, but they served the most original taste of “kahwin” toasts (kaya & butter spread), soft-boiled eggs and coffees (RM7.20 ~S$3). As a diet-watcher, I took 2 eggs, with 1 yolk less. For both the dieting and health (reduce LDL cholesterol intake) conscious.

Never given up on the famous chicken rice ball at Chong Hwa Coffee shop, this was another achievement we were proud of ourselves. After the day time visit to Jonker Street (bought some souvenirs and enjoyed another bowl of Chendol from a famous shop [RM1.70 (~S$0.70)], after long walk under hot sun), we arrived at the popular coffeeshop at the noon, just in time for a hungry lunch! However, there was no way to avoid the crowd and lines of other hungry diners. We almost gave up, wanting to hop across to the chicken rice ball shop nearby (there are at least 3 chicken rice ball restaurants Within the same vicinity), but those restaurants seemed touristy and over commercialized from its outlook, we decided to stay put. Glad we did, just a mere 25 minutes wait, we got to share seats with the existing diners. It was rather fine with us as we really enjoyed the tastiest chicken rice balls in town! This lunch meal was billed at RM17.50 (~S$12).

We then walked to the street (name unknown to me) just next to Jonker Street to visit the famous Chinese temple, for religious offering as well. Along the street, it was full of shops selling freshly baked pineapple tarts. They claimed themselves to be the most original sellers, the tarts, baked in different shapes and sizes, were priced from RM6 – RM11 (~S$2.50 – S$4.50) per box of 10 – 15 pcs. Without further delay, I bought 2 boxes of the nice, crispy and buttery-fragrant open top pineapple tarts. I liked it.

As a foodie, food came first, as always. I wasn’t too keen to elaborate on the sightseeing placed. The usual, “Red Houses”, A’ Famosa, St. Paul Church and street markets. The only special visit which I thought worth talking about would be the Jonker Street where I would relate it back to food eventually. :D In fact, we tried the fried carrot cake with black sauce which had been recommended in a Taiwanese food program. Oh well, I thought food was a personal preference, in this instance. :) It was way too spicy (even requested less chilli) and over-powered with its saltiness, I really thought we had better carrot cakes in Singapore or elsewhere. If you keen to know, it was priced RM3.80 (~S$1.60) with an egg added. There was another recommended dish called “算盘子” (Fried Yam “beads”) which I had given it a miss. Too much good food!

Talking about food, Malacca was the home of Peranakan race (where Baba and Nyonya were orginated from). So, thier specialies food is Peranakan food here. It appeared to be a must-try cuisine in Malacca. Only if we had another day here, no we did not. The only Nyonya related food I got to try was their sweet snack, red bean Kueh, which happened to taste during visit to Jonker Street’s night market the other night.

For tourist, you might be keen to try on a trishaw (1 hour ride costs RM40 (S$18) per trishaw) which would bring you around Malacca tourist places. We weren’t not too excited about it since trishaw wasn’t something special to us.

We travelled around the town mainly on foot. So, we did not go too far out. Those very popular sightseeing places eg Hang Li Po Well, Sam Po Cave etc were driven pass during our taxi ride to the Sentral Bus Terminsl, for catching our coach bus back to SG (taxi fare was RM15 (~S$6) per trip from to the hotel and flow).

Exhausted (as we had been walking around the town), but it was an enjoyable weekend breakaway.

By the way, we did not get a lot damage on shopping. I bought just a pair of cute cloth slippers (3rd row, most right side) for myself, from the night market in Jonker Street. RM10 (S$4.20) for a pair. Very comfortable to wear at home. :)

P/S: Keen to check out the caloric count of the good food mentioned earlier? Check out my list.