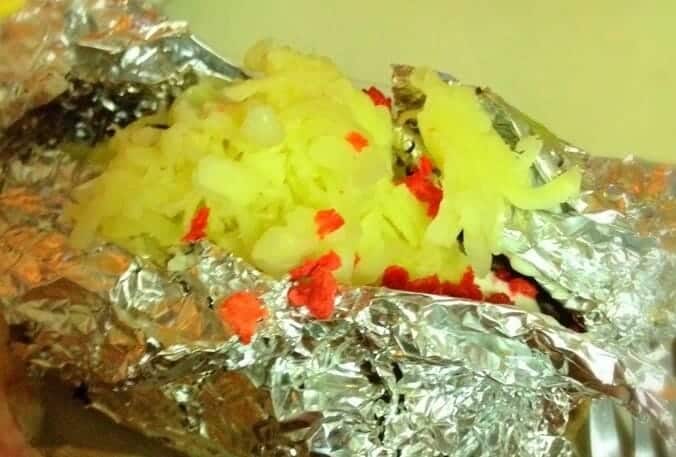 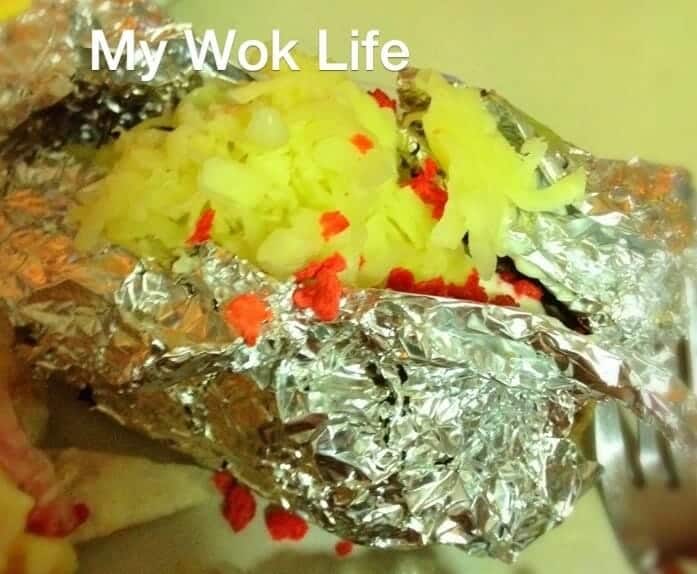 “Baked these potatoes, and make it part of your festive meal. I did, on Christmas Eve dinner.”

Actually this was just my usual jacket potato where potato was baked and filled with cheese, sour cream and bacon bits. I called it the Christmas Eve Jacket Potato simple due to my strict yearly cooking of this as part of the set dinner only on the Christmas Eve.

I think I already had a similar post on Jacket Potato a while ago, but it’s ok. Here’s the revised version with different combination of toppings, anyway. Starting from Jacket Potato, I would post the revised recipe for the other two dishes in due. :)

Methods
1) Prick all over the rinsed potatoes with a fork. Rub olive oil and salt in the potatoes.

2) Wrap each potato with aluminum foil. Do not over wrap them. Use 1 layer of foil will do, and simply fold 1-2 folds on the closing top and sides. Then, use the fork again to pierce the foil. Repeat for all the potatoes.

4) When done, transfer potato to serving dish (Beware of these piping hot items). Use a small knife to create a deep cut across at the top middle of the potato, lengthwise. Need not to unwrap, just cut through the foil. Twist the knife a bit to create an opening on the potato, and then, fill butter, followed by sour cream, grated cheese, and sprinkle some bacon bits on top. Serve hot.

May also add cubed ham as part of the fillings that makes it more festivity for the season!

A serving of my large baked jacket potato counts abt 290kcal.