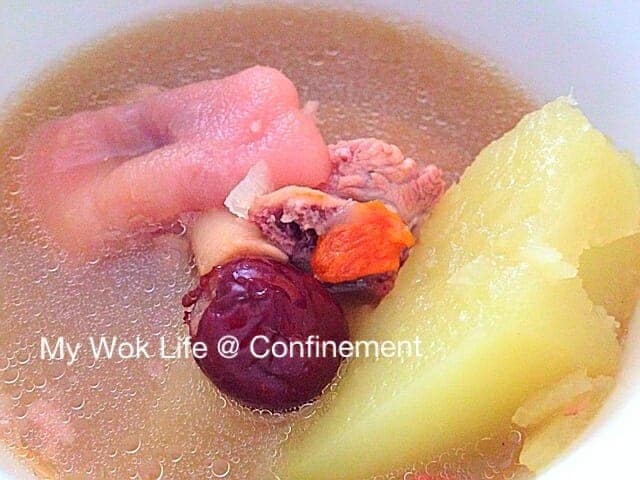 Yes. This soup is great for increasing breast milk supply, and hence, it turns out to be an important and great confinement soup dish, especially beneficial to the new mummies who are breastfeeding their new born during this period.

Green papaya soup is also recommended by the hospital. If you happen to browse their lactation leaflet, you will notice some recipe suggestions listed on it include the green papaya soup. Mostly using fish meat to complement the soup, but I personally believe the better effect in increasing milk supply by adding pork knuckle (pork hock) instead.

Yes, by right you should eat the pork knuckle, too. Give yourself a break during confinement period, k? Just eat some, even if you do not like it much.

Method
1) Blanch pork knuckle in a pot of boiling water over high heat beforehand. Set aside.

2) Boil another pot of water (750ml) over high heat, add in the blanched pork knuckle, papaya, ginger, red dates and wolfberries. Bring the pot to a boil again. Reduce heat to low fire and simmer for 1 – 2 hour, or until soup level reduced by a quarter.

3) Add salt and pepper to the soup, gently stir to combine. Heat off and serve immediately.

A bowl of green papaya soup with one portion of pork knuckle counts about 250kcal.

Tips: Green papaya is light yellow colour in flesh. Eat it together with the soup as well as pork knuckle. May or may not need to peel off the skin.
* Cook pork knuckle with its skin and fat.

Hello! My name is PatriCa, 雪冰. I love food. Cooking is my passion, and it's all about sharing. I want my loved ones to enjoy healthy home-cooked meals. So, that includes you! Come join me on MyWokLife FB Page, Instagram and Twitter. Or, leave me your comments, PM or contact me at mywoklife@gmail.com. Sharing is caring~ Appreciate your kindness to credit or link back if you do use my recipes for any purpose.

You don’t need much of the seasoning. The real f

Mentaiko in any food.. #明太子 is one of the si

Whenever in #japan🇯🇵, other than those local