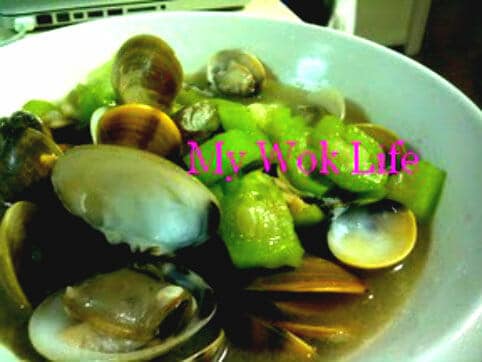 “Still clams, still soupy.. And now with mallow squash. Delectable and low in fat, this soup dish is also easy to be assembled at home!”

Seafood and mallow soup dish. Not quite a soup, but more like a soupy dish. Don’t understand what I mean? Ok, let me explain… This recipe was supposedly a moist (but not wet) barbequed dish, but I added with some water to make it a soupy dish. I did not add too much water, just half the amount of the usual soup cooking’s, just to make it more soupy, that’s all.. That’s why I called it a soupy dish instead of soup dish.

Liked it with more liquid as the flavor of clams will be fully emerged in the soup. Eating the clam and mallow together with its soup yields even better aromas in the palate, indeed.

I will show you how to make the barbeque version next time, but for now, cook this! :)

Method
1) Rinse and soak clams in a large pot of heavily salted water, for at least an hour. Drain with strainer and set aside.

2) Then, bring a pot of water to a boil over high fire. Add in clams and blanch for 1 minute. Remove from pot and drain.

3) In a large pot, add in water and bring it to a boil over high heat. Reduced heat to medium fire, add in lightly blanched clams and sliced mallow squash. Simmer for 20 minutes. Add salt and pepper to taste. Continue simmering for 5 minutes before heat off. Ladle soup and ingredients into large serving bowl and serve hot.

For more cooking options: If you wished, steam this soup instead of cooking it on stove with direct fire. Simply add in boiled water, blanched claims and mallow squash into a large bowl to steam on wire rack in the wok filled with water (on high heat), or in an electrical steamer. This way, the texture of the soup may tastes smoother.

A serving of this soup dish counts about 120kcal.