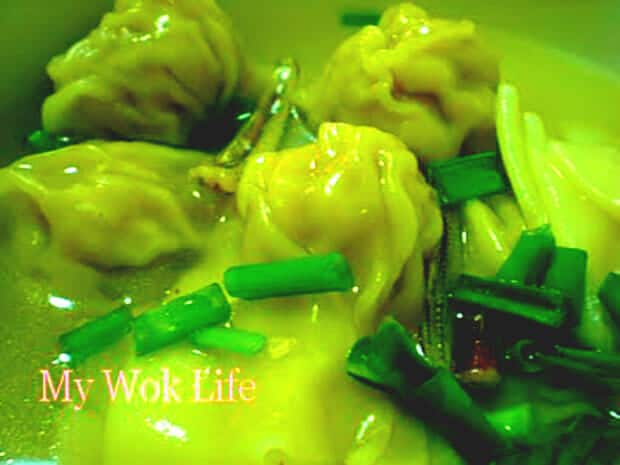 “Scrumptious wonton soup, good for an enjoyable meal, perfect for warming the heart of your loved ones! Check out my recipe and tips to make and cook good wonton soup!”

Wonton is a word transcribed from Cantonese. In mandarin, we called it 馄饨 (pronounced as “hoon toon”). It simple means irregularly shaped dumpling. The other more simplified name is 云吞 (pronounced as “yun toon”), which direct translated as cloud swallow. Either way, they all mean tiny dumplings!

I like to make wonton as it is simple and much likeable by my little one as it looks like cute tiny balls in the bowl.

The wonton skins or wrappers can be made at home from fresh dough. However, you might find it tedious to roll each wrapper to very thin sheet. Moreover, it is so convenient to buy the wrapper off-the-shelf, nowadays. They are typically sold in a vacuum-packed of square-shaped pre-made wrappers, with cornstarch dusted between these 7cmx7cm cubicle sheets to keep them from sticking together.

I bought a packet of wonton wrappers at supermarket, costs about $1.20 per 24 sheets. Since the size of wonton wrapper is relatively small, it could only be made to thumb-sized big. Hence, if you intend to make bigger wonton, or adding whole shrimp in it, get the dumpling wrappers which come in palm-sized circular sheet instead of the squares.

As for my wonton filling, I have added also some fresh fish paste bought from wet market. It’s readily ground into paste, mainly used in making fish ball or as the stuffing of tofu aka “Yong Tau Fu” (酿豆腐). Fish paste packed in a small tub is also widely available at supermarkets, besides wet market stores. Mixture of ground pork (minced pork) with fresh fish paste created excellent combination that yields even smoother mouthfeel and greater taste! Well, this is an option for you…

Ingredients B for soup base:
50 gram of dried anchovies aka ikan bilis, with head and internal parts removed
100ml of chicken stock (or 1 chicken stock cube)
Sprinkle of salt and pepper to taste
1 pot of water, 50% filled (about 1000ml)

1) Seasoned mince meat with all condiments listed A (and fish paste, if opted). Combine well and set aside, or you may leave it refrigerated for 1 – 2 hour marinating time.

2) Spread a single wrapper square across the palm of one hand, heap a small clump of filling with a teaspoon and place in the center.

3) Dip your clean index finger of another hand with egg white or plain water, run your finger across the wrapper’s inner side (area closer to the filling) in order to moisten and seal the wrapper.

Detailed steps:
During the sealing process, first, ligtly ‘press out’ the air inside the half-folded wrapper (if using square sheet, fold into triangle shape, from one corner diagonally to another corner), so that the filling may adhere to the wrapper completely and also to avoid rupturing the wonton from internal pressure when boiled. Then, use finger tips to simply compress the edges between the filling and excessive wrapper to seal up the opening (remember to damp it first). Lastly, ‘close’ your fist to ‘crumple’ the whole wonton a little, resulted an irregular shapping. That’s why it is called “hoon toon” in Chinese, the irregularly shapped dumpling (chuckling)! Repeat steps 2 & 3 till for all done.

4) To make soup base: Boil a large pot of water over high heat. When water boiled, make sure the heat is turned to low flame, before putting in the wonton. Boil wonton till 90% cooked (wonton skins should turn to light and almost whitish appearance when almost cooked) and all excessive flour on the wrappers are completely dissolved. Wontons will appear ‘crumpled‘ due to slight shrinkage, and float up to the surface of the soup, when it is done. So, heat off once it shows all these signs (smile). Drain and set aside.

5) Boil another pot of water over high heat. When boiled, add in dried anchovies and chicken stock cube. Reduce heat to medium-low fire simmer for 30 minutes.

6) Add in salt and pepper to taste. Then, place 90% cooked wonton into the boiling soup 1 minute before heat off. Garnish and serve hot.

You may choose soy bean soup base (see recipe here).

A bowl of five wontons in soup counts about 200kcal. You may choose to fry the wonton instead of making into soup, but don’t, if you are managing your weight at the moment as fried stuff adds at least another 80kcal!

Wish to try making your own wanton wrapper, adopt the recipe from my potsticker recipe. The main adjustment is to have the dough rolled into very thin sheet for making wonton wrapper, one by one, gently and patiently!

Tips: The wonton wrappers are made into very thin sheets, they dry out within a few hours after opening the package, afterwhich making them brittle. So, cover with clean kitchen cloth or cling wrap even after making into wonton with filling, but not putting into boil so fast. Cover them!
* If you do not fish sauce, replace with light soy sauce.
* For express wonton filling making: simply add 1 teaspoon of chicken essence powder (or mashing a chilled chicken stock cube into powder form) into the minced meat to enhance its overall taste. Marinate minced meat mixture for 15 minutes will do.
* Do not stir the soup too vigorously when the cooked wontons are added in.
* Make sure all wontons are well-sealed before cooking. And they should be boiled at low flame till cooked so as to help to avoid rupturing.

Hello! My name is PatriCa(雪冰). I love food. Cooking is my passion, and it's all about sharing. I want my loved ones to enjoy healthy home-cooked meals. So, that includes you! Come join me on My Wok Life FaceBook, Instagram & Twitter. Feel free to comment, PM or email me at mywoklife@gmail.com.
All Posts »
PrevPreviousVegetarian Almond Cup Cakes Recipe (Eggless Cake)
NextCutie Bear Chinese-Style Steamed Egg (熊仔蒸水蛋)Next 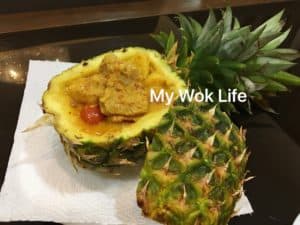 “My new pineapple curry, with made-from-scratch curry paste recipe.” Curry, a dish which comes in all variations, and has been cooked in all cuisines. No 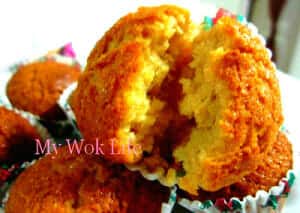 “Tiny Eggless Almond Cup Cakes, good for your vegetarian diet, perfect as healthy snack for your young ones! And, it is simple to make!” As 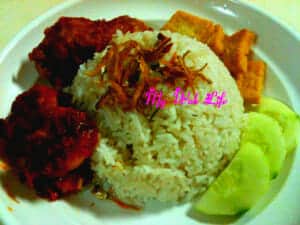 “What a great way to say hello to your overseas friends. Let your home-cooked do the job!” Nasi Lemak, a common name in the list of the