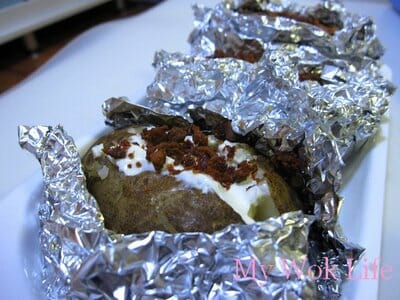 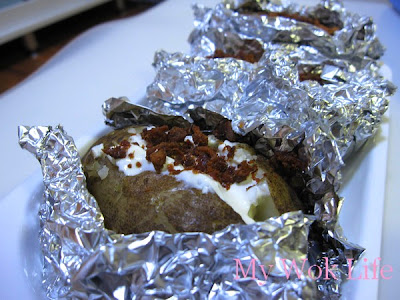 “Jacket potato with the all-time-favourite filling of sour cream and bacon bits, who can resist it?!”

Jacket potato, commonly known as baked potato. We call it a jacket potato when additional fillings are complemented. There are ways to make jacket potatoes. With or without foil wrapping, use of oven or microwave, with soft & moist or crisped potato skin texture, as well as various choices of toppings, from taste of basic sour cream to complex seafood mixture. Name your desired choices!

What I am sharing here is recipe of baking soft & moist jacket potato with basics fillings/ toppings of sour cream and bacon bits which yield a conventional flavour which never fails you. I used aluminium foil when baking the potatoes. Using a foil to wrap up the potato yields softer potato as the foil holds moisture and ‘steams’ potatoes, while leaving it unwrapped will create crisped and crunchy skin.

Method:
1) Wash each potato with its skin scrubbed thoroughly. Pat dry the potatoes.

2) Baste potato skin with some olive oil and little salt. Prick potato using a metal fork all over its skin. Then, place each potato in a large sheet of aluminium foil individually (foil big enough to wrap one whole potato), and wrap it up entirely.

3) Preheat over to 200°C for about 10 minutes. Place each potato slightly apart on a tray and bake for 50 minutes, or until cooked and tender. You may insert a skewer or toothpick to test its doneness. 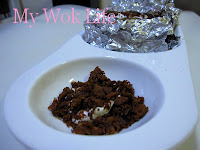 5) When potato baked, remove from oven. Open foil and fold down partially to slice each potato in half or make a cross on top. Fill one tablespoon of butter, two tablespoon of sour cream and top some bacon bits on each potato. Serve warm.

Prepare these for your grilling soiree, or serve it with your western meal at home! It’s also good to have it as snack for a tea break, isn’t it (smile)? Each jacket potato of mine counts about 400kcal. Remember to choose Light sour cream instead. Taste has no much difference from the regular one, but its load of calorie does make a difference! You may even replace sour cream with plain low-fat yogurt.

Tips: Be cautious with the hot potatoes when handling right from the oven. Always use insulated mittens or gloves.
* Choose large oval shaped potatoes with uniform sizes and shape for heating evenly using same time. I used Russet potatoes.
* Bottled bacon bits are easily available at various supermarkets.
* Serve with extra sour cream and bacon bits by the side for diner who needs the extra flavour and crunch may be a good idea.