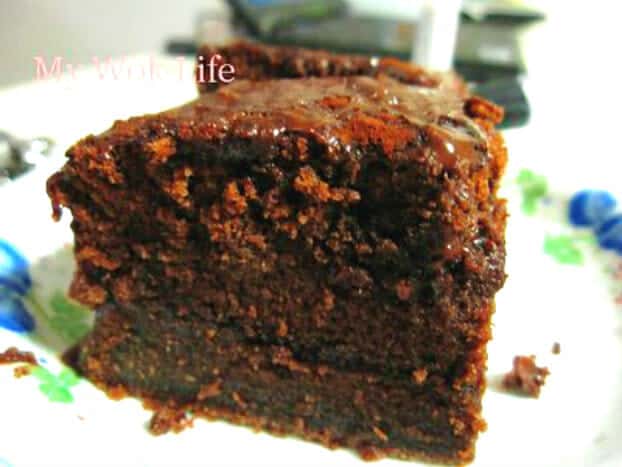 Yes, this was my super moist chocolate fudge cake using confectionery milk chocolate bars to make. For the fact that milk chocolates (instead of baking dark chocolates) were used, it was ideally flavored. The richness of the chocolate was pleasant, not at all over-whelming. I wouldn’t feel repelled from having it in a big slice.

This cake was a big hit, and well-liked by my family and friends.

Melt milk chocolate and butter together with double boiler on stove over slow fire.
In the meantime, place flour, sugar and cocoa powder in a large mixing bolw. Add eggs and water into the dry mixture. Beat with electrical mixer with low speed for 1 – 2 minutes.
Stop beating, add in warm melted chocolate and butter mixture. Continue beating with medium-low speed (speed no. 2) for 6 – 8 minutes, or until it looks smooth and lightly foamy kind of consistency (you may test its readiness by scooping a spoonful of mixture, and it should adhere on the upturned spoon for at least 1 second).
Grease 8” square or round cake tin evenly using butter or olive oil, or you may line the non-grease paper sheet, if desired. Spoon cake mixture into cake tin
Preheat oven using 150°C (top and bottom heat on). Place cake tin at centre rack. Bake for 50min to 1 hour. Toothpick inserted to the cake should come out clean. Allow cake to cool on wire rack, for about an hour.
While waiting for cake to cool, let’s do the chocolate glaze frosting and filling: Combine melted chocolate and butter in a mixing bowl. Beat in 30g milk in stages, followed by cocoa powder and sugar. Slowly add in more milk (by teaspoon) to get the right spreading consistency while beating the mixture with electrical mixer, if necessary.
When cake is completely cooled, remove from tin and slice it horizontally into 2 – 3 layers. Then, sandwich the cake by spreading chocolate glaze on each layer of the cake before placing another layer on top. Thereafter, frost the entire cake in a thick layer and smooth it down evenly
Keep in the refrigerator for 1 hour to serve it chilled, as desired. Sift some cocoa powder on the top of the cake or dust a thin layer on the entire surface, dusting as decoration, just before slicing the cake to serve.
Notes

You may experience cracks on top of the cake towards the end of baking time, but it’s alright, its consistency will not appear overly dry, and it will be covered with frosting. Or, try to reduce the baking temperature by 10°C.

Store the balance chocolate frosting in the refrigerator for future use, if any leftover.

Many said that chocolate cake is difficult to make. I agreed. I remembered my first chocolate cake turned so chewy and later found out that I might have been over-beaten the batter during the process of mixing. However, the fact has turned round with this recipe where I mixed and matched from a few chocolate cake recipes online which has now been adapted into my own. Yes, no premix cake flour used this time. There were only common ingredients in this bake. To make it even simpler, I chose self raising flour instead of plain flour. If that’s what you preferred, simply add 1 teaspoon of baking powder and 1/4 of salt into thr plain flour of same amount. Go, give it a try now! :) 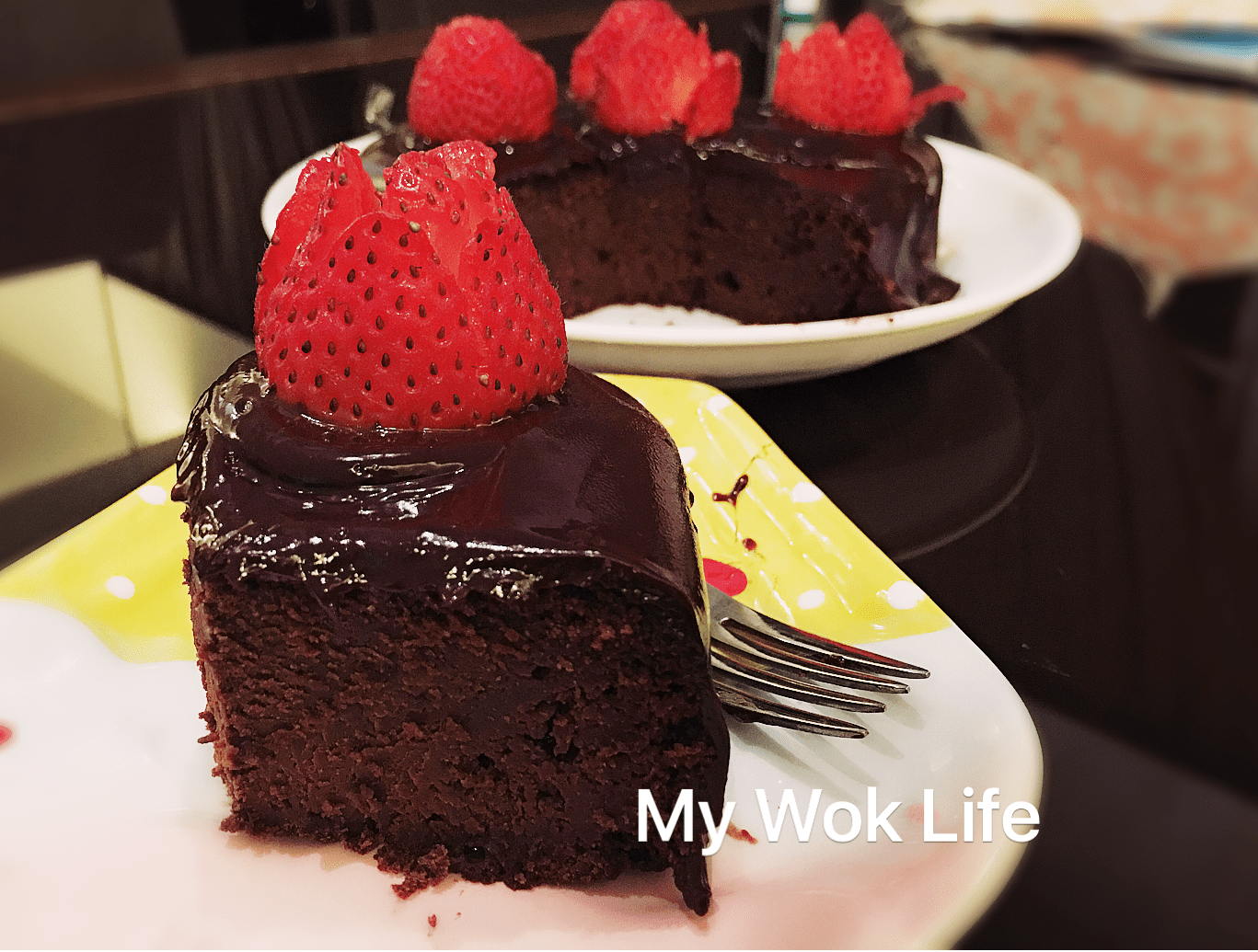 [Post Note 2016]: Baked this cake again, but I did not layer the cake for chocolate filling in between (Step 7). Served it whole with chocolate glazing and strawberry roses on top. The chilled cake appeared a little denser than usual, but it all went well again with nice softness in its consistency just after 20s of reheating in microwave. So, no worries of refrigeration for easy storage. Voilà :)