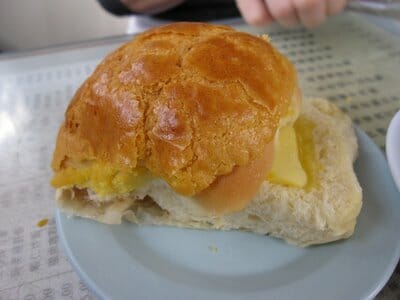 There were so many reasons for us to choose our hotel stay in Kowloon side during our trip this time. The ultimate reason, food, yummy food, of all kinds.

We stayed near Mongkok (旺角), accessible by public transportations. This seemingly more “shoddy” side of the area was notoriously crowded. To me, it was the shopping and most of all, food. I thought it was for good.

Yes, food was everywhere for us, but we came here for this. Mido Cafe (美都餐室) @ 63 Temple Street, Yau Ma Tei, Kowloon. This Cha Chaan Teng (茶餐厅) in Temple Street (庙街) had been around for more than 5 decades long. To show sign of their old enough establishment, look around in the cafe, and spot a signboard written with the cafe name where its text was oriented from right to left. That’s the tradition way of Chinese writing in far olden days…

‘Pineapple bun’ (Bo lo bao 菠蘿包), has no pineapple within, simply named after the layer of sweet crust found on its chunky plain roll that resembles the outside of a pineapple. It is typically eaten during tea time. At Mido and many other places, it’s also served as breakfast. In fact, at any time of the day. :)

The bo lo bun at Mido was indeed delicious. The sweet crust had the right amount of sweetness and flakiness to it. Soft, fluffy warm at its best.

Bo lo bao would taste even better with a thick slice of cold butter stuffed into the warm bun. We called it, Bo Lo Yao 菠蘿油. I liked it at Mido. Unlike some other places, Mido heated up the bun first before serving it to you, without the need to prompt.

Yes, bo lo yao is best to serve warm, not only to return the bun to its softness and fluffiness, it melts along the cold butter which seemed to be the best condition to enjoy. The contrasting feeling of its warm and cool in the palate gives diner an exciting mouthfeel, too. And yes, Mido served bo lo yao with a whole slice of butter instead of spreading it on.

Gentle hint: Flip open the bun to check on the butter. Make sure it is in semi-melted form, it means it has been heated enough to ensure the bun is soft and warm to taste at its best.

Actually, this decades-old Mido Cafe made its fame on the French toast and some western dishes, not so the bo lo bun.

There was a notice board at the main entrance displaying some old newspaper articles. Featuring the success stories on how their French toast and other dishes got lauded, they also shared their open secret on the making of their French toast. It said that the bread would be steeped in the egg solution for more than 5 minutes before deep frying. It was to ensure that the bread is soaked up with more than enough egg liquid, in order to maximize the eggy taste in the toast.

Of course, we had to taste. Yes, anything fried taste good to me. The French toast was crisped on the outside and moist & soft inside. The eggy taste was pleasantly strong in every bite. However, it was too oily after deep frying. To top it off, they added a big knob of butter on the fried toast. Yes, it was visciously delicious, literally. :)

Just to share a little bit more. If you wish to save some bucks and don’t mind ordering from set menu, the bo lo yao has its option off the menu, too. Check with the cafe server.

For more precise direction:
My Note Book on The Web.