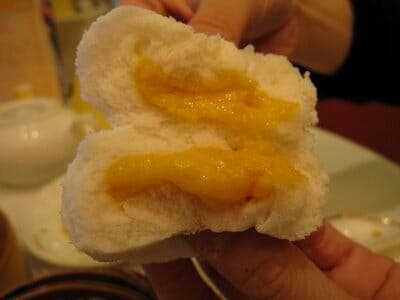 “My list of Dim Sum food for the Dim Sum lovers! What’s yours?”

It was my first (and only chance during the trip) Dim Sum (点心) meal at City Hall Maxim’s Palace.

Maxim’s Palace had two branches (that I knew of), my initial intention was to visit the Kowloon branch since its location was more convenient for us at that point of time, but online reviews sided only the City Hall branch where they claimed a real good Dim Sum. So, we had to make a deliberate trip down.

Yes, this was the “bao” that I mentioned. 流沙奶皇白包, molten custard & salted egg yolk bao, which also recommended by the restaurant attendant.

Why was it being called as 流沙 (flowing sand)? Reason being that the consistency of the hot filling in the bun was so smooth and rather flowing, resembling the viscous lava… Yes, the filling was molten. Eat it hot, but be minded not to get scalded! :)

Yes, it was all about the molten filling in the hot steamed bun. Really loved the fact that this steamed bun was perfected by its tasty filling, the aromatic mild egg yolk flavour was definitely the grasp of it. Yes, the bao tasted more to the briny side, not so the sweet-sweet flavoured.

Steamed roast pork bun aka Char Siew Bao (叉烧包), one of the popular items which crowned the Hong Kong Dim Sum list. You probably wouldn’t end your meal without having at least one. Without a shadow of a doubt, Char Siew Bao at Maxim’s Place, of course, was enticingly delicious! It’s lavish filling of the lean pork meat with minimal lard in the bao was cooked in its perfection, with the right combination of sweet and briny flavour.

Being the conventional Chinese Canton restaurant, Dim Sum food served in steamer basket could be seen stacking on the push carts. These push cart dim sum would then be pushed around and stopped by every table for diners to choose their options. The push cart lady would also be calling out the various options on their carts. However, I would suggest you not to wait until it comes to you, unless the cart serves those less popular options which usually left plentiful, you have to walk up (or literally rush up during breakfast/ weekends/ holidays) to the cart to grab your food once you heard upon the lady calling out those popular Dim Sums eg Haa Gao (steamed prawn dumpling), Siew Maai (pork & prawn open top dumpling), Lo Mai Gaai (glutinous rice & chicken), Cheong Fuun (stuffed rice rolls), Char Siew Baao (steamed pork bun)……. :D

If you are feeling generous, go for this superior shark fin dumpling soup (鱼翅灌汤饺). We pronounced it in Cantonese as, ‘Yu Qi Goon Tong Gao’.

A chunky soup dumpling filled with chicken broth, pork meat and shark fin (some used dried scallop instead). The chicken broth base was incredibly flavoursome.

By far, I would considered this, steamed yam cake (Lo Baak Gou 蘿蔔糕), as my top favourite. Outbeat even the irresistible molten custard bao and steamed haa gao, this super tender, smooth and almost melt-in-your-mouth steamed yam cake served in clay bowl had to be in your top 3 list, too.
[Post Note: (2016) I believed this superlicious steamed yam cake had been taken out of their menu. The last time I was there and ordered their steamed yam cake, it seemed different and ordinarily tasted, too. I wasn’t sure why.]

Cheong fun stuffed with prawns(鲜虾肠粉) and to be served in special light soy sauce. The paper thin rice rolls were so smooth and soft to taste.

Fresh haa gao (鲜虾饺). With the right texture of translucent dumpling skin and tasty fresh prawn in it, no way you could resist this signature Dim Sum food. Other dishes in our list of order such as steamed siew mai (蒸烧卖), spring rolls (春卷), egg tarts, and etc, were genuinely good, too! In fact, there wasn’t a dish we ordered that made us frown.

For sure, we wouldn’t miss the main lead of the whole “Yum Cha” (tea-drinking) ritual, the aromatic Chinese tea! We selected these tea leaves named Shou Mei (寿眉). See its light brownish tea colour, you already knew that such tea we ordered wasn’t very thick. We preferred something lighter and more soothing for the throat.

The total bill for 3 with reasonably filled stomaches came up to about HK$375 (~S$75), just for your reference.

I personally loved the Dim Sum here and strived to come back for more! 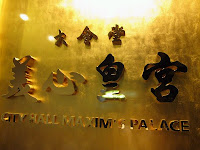 Maxim’s Palace City Hall (大会堂美心皇宮) @ City Hall Low Block, Hong Kong. The restaurant is located at the second level of the City Hall Building. Opening hours: 11am-3pm; 5:30pm-10:30pm on all days except Sunday which opens at 9am.

Tips: Do not be confused by the Maxim’s Cafe (under the same organisation) which located at the ground floor at outer area of City Hall Building. You have to go into the building, 2nd floor to reach the restaurant, Maxim’s Palace.