Shark fin melon is NOT shark fin, but just kind of greens, an edible melon.

We called it shark fin melon simply because its squash resembles shark fin when boiled and soften.

Its plant name is Cucurbita ficifolia.

This melon often cooked as dessert or soup. I love it in soup as it tastes mild and natural sweet in soup. You may imagine a taste of a little bit like the winter melon, but sweeter than winter melon; A little bit resembling the old cucumber soup, but not taste not as robust as old cucumber though. However, the texture of melon flesh is a total difference. When this shark fin melon is boiled and soften, its flesh will ‘split’ and becoming strips which looks like the shark fin. 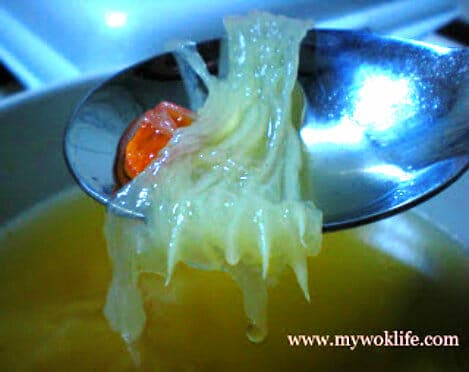 This shark fin-like melon flesh is almost tasteless, but soft in the palate. A combination of ingredients in this soup recipe is a total success. The most natural sweetness from these ingredients will be extracted into the soup. Not only that, this combination also contributed to nice colours, and moderate nutrition value instead of having just the shark fin melon which has little vitamins and minerals. Chinese eats shark fin melon for its ‘cooling’ effect.

Since the ingredients used in this soup are good enough to sweeten the soup naturally, I cooked it as vegetarian soup, without pork ribs added.

It’s a very simple and easy soup recipe, but mild and heart-warming taste for the family.

Method:
1) Bring a pot of water to a boil over high heat.

2) When water boiled, place all ingredients in the pot. Reduce heat to low fire. Simmer for 1 hour or until ingredients are soften. Cover the pot with lid, or lid slightly tilted on the pot, if soup is bubbling strongly. Add salt to taste. Heat off. Serve hot.

This soup has also becoming a diet soup for me during my dieting period (chuckling)! But of course, you may add pork ribs or chicken thighs, if meat is preferred. Without meat, this soup is also low-fat, calorie in this soup is less than 100kcal for a large portion!

Tips: It would be good to boil this soup with slow cooker, too! Place water and all ingredients into the croak pot. Sprinkle some salt, and adjust slow cooker to Auto-shifted/ Low mode, before leaving your house for work. By the time you reach home, the soup is all ready for consumption.
* Unless you are cooking this shark fin melon for dessert, else cook the shark fin melon soup together with its rind for better nutrients and its fleshes will not disintegrate easily. The flesh is easily removed from the rind for eating once it is soften. Its thick rind will not present any ‘greenish’ taste in the soup. Hence, no worries about cooking it!