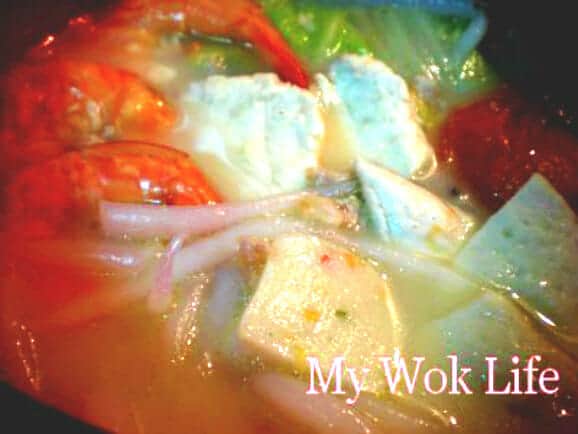 We were having packed Mee Tai Mak Soup from hawker stores as dinner for the past two days, as we wished to have just something hot, soupy, light and fast. And, I was still fanatical over the same noodle soup, for tonight’s dinner. Not the same again, we had the home-cooked one, I cooked as I was inspired by the blogger of My Memories, posting her Milky Fish Soup. It built the urge of having it cooked with a different kind of soup base, the milky type instead of my usual clear soup. With much variances, I’ve came out with the noodle soup recipe of my own. 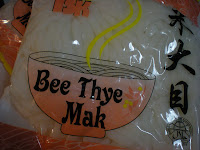 Besides fish slices, I have added with other seafood as well as some minced pork meat, to make my soup dish more plentiful. Assorted soup (什锦汤) has always been my favourite as I’ll get to eat in varieties, despite having to cook only 1-dish meal.

And, Mee Tai Mak, to spell it exact, it should be Bee Thye Mak, according to the packaging, I love this chewy rice noodle. It is made short, to have it easier to scope using just a spoon when eat it. Unlike yellow noodle, bee hoon or rice vermicelli  its texture is much more chewy. It looks crystal white when cooked. Taste of Mee Tai Muk is rather bland. So, it is best to go with rich flavoured soup, or thick gravy. I’m going to show you my flavoursome soup base now: 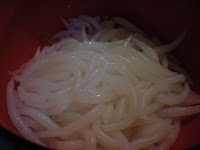 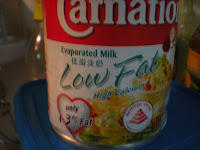 2) Pour in water. Bring the pot to a boil again. Add pepper corns and tomatoes. Allow the soup stock to simmer for at least 40 minutes, with lid on. Keep the soup slight bubbling with medium-low heat, when simmering.

4) Then, add in prawns and fish slices. Stir in evaporated milk, and let it boil for another minute before heat off.

5) Divide noodles into 4 – 5 bowls. Ladle soup with ingredients into each bowl. Serve hot. 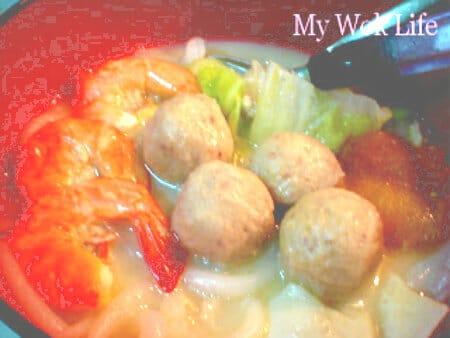 I loved pork meatballs. Whenever I cook noodle soup dish, I will try adding it, just for her. You may vary the ingredients such as mussels, squids and etc, as wished, as long as they don’t affect the taste of the soup.

As for the choice of fish, I used Sea Bream fish fillet. It’s boneless and less fishy scent. 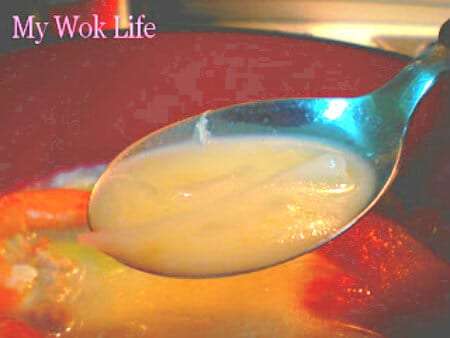 Simply loved the soup with milk even just a little, as it made the soup extra tasty!

Just because it is assorted (seafood + pork meat) soup with (low fat) milk, this noodle soup dish yields about 400kcal. I used low fat milk, it helps a little here by reducing 50kcal. If desired, change it to pure fish slices noodle soup (with milk), it’ll reduce calorie by 60kcal. Without milk at all, the noodle soup counts only 340kcal. I’ll leave the choice to you!

Tips: Increase or reduce the amount of evaporated milk, to your desire.