We liked to drink soup. Westerners liked creamy soup, Asians liked herbal soup. Singaporeans liked both the creamy soup e.g. Cream of mushroom and herbal soup e.g. Ginseng Chicken soup. In Singapore, it was easy to find stores or even top-notch Chinese restaurants selling good tonic soup. However, I still found it the best to homecook! at least we knew what goes into the soup.

Some of my friends told me that they do not have time to boil herbal soup as it would take hours to extract the essence of the herbs. I suggested them using a slow cooker. Some said they heard that the soup cooked from slow cooker does not taste nice, but I wouldn’t quite agree.. I used slow cooker to boil my herbal/ tonic soups and even Bak Kut Teh (Meaty pork bone herbal soup), during workdays. Just put water, meat, and herbs or herbs packet in the pot, set slow cooker to Auto mode to slow boil in the morning before going off to work. By the time we reached home in the evening, the aroma of ginseng soup filled the house…. Add salt to taste, just about 5 min before served.

No worries as soup would never dry up no matter how long it boils if setting to Auto mode. The soup was flavorful, and the chicken meat was very tender after boiling for more than half a day. It was as good as boiling it on stove.

However, not all herbal/ tonic soups require long simmering, for instances, Chicken with Ginseng Beard Soup (洋参须鸡汤). Stove boiling method would be fine.

Ginseng chicken soup was healthy, and economical (also depends on the grade and quality of ginseng used) to cook at home. Most commonly cooked was the Korean Ginseng Chicken Soup. However, I like American Ginseng, too.

Some people might find the taste of ginseng in the soup over powering, if whole ginseng roots were to be used in one cooking. I would suggest usingginseng beard or slices, if that’s the case. I used ginseng beard, at times.

As for the choice of chicken, some people liked to cook this with whole black chicken as they claimed that black chicken was better for health. I preferred white meat, especially chicken thighs, for soup.

Ginsengs, were also segregated into the use of different parts of it, different classifications/ types from various origin countries, and with the difference in “heaty” and “cooling” effects. I ain’t ginseng expert, but I could tell you that the ginseng (I called it American ginseng) that I often used, was for “cooling” effect. It wasn’t costly, I bought a packet for only S$8 (which can be used for 2 cookings, each serves 3 – 4 person). 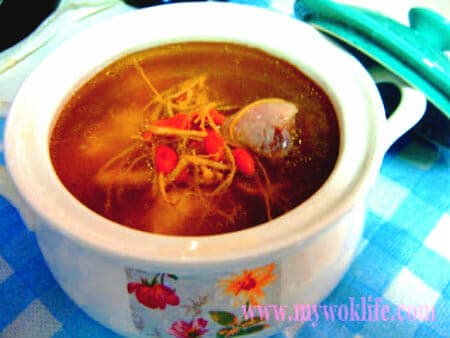 Soup, is the best food for dieters, but it’s only great if the soup is not excessively oily. To boil even healthier and low calorie tonic soup, I would suggest using chicken breast, instead. Drumstick is good, only if its skin and fat were trimmed off. As to my cooking style, I would cut away all the fat and skin, but to leave a little part of the skin on the stick portion. I liked having a little bit of chicken fat to add more taste to my soup. :) 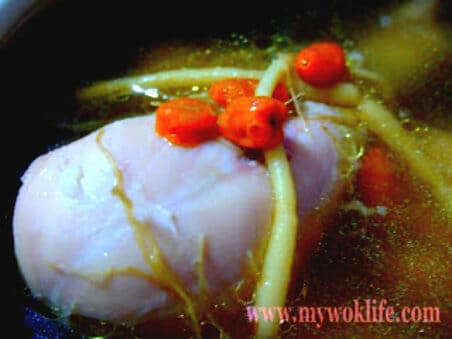 Method
Boil a pot of water over medium-high fire. Put in chicken drumsticks, ginseng and wolfberries. Bring all ingredients to a boil again. Reduce heat, simmer for 40 min. Covered with lid. Stir in salt. Serve hot as 1-dish meal, or drink before/ during dinner.

Try this super easy and hassle-free soup. Ditch the slow cooker this time, no long hour simmering needed, too. The soup will be ready in 1 hr time.

Tips:Adjust salt to your preference.

Hello! My name is PatriCa(雪冰). I love food. Cooking is my passion, and it's all about sharing. I want my loved ones to enjoy healthy home-cooked meals. So, that includes you! Come join me on My Wok Life FaceBook, Instagram & Twitter. Feel free to comment, PM or email me at mywoklife@gmail.com.
All Posts »
PrevPreviousFragrant Chinese Fried Rice and Simple Pan-Fried Pork Chop Recipes
NextWanna lose weight? Know Your Daily Calorie Needs BetterNext 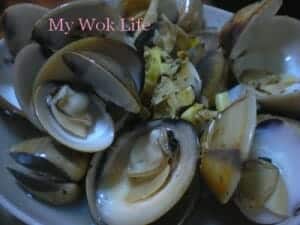 “It’s absolutely my favourite clam dish, for meals or one fo the dishes that complements your drinking session in the cold weather.” Clam is one 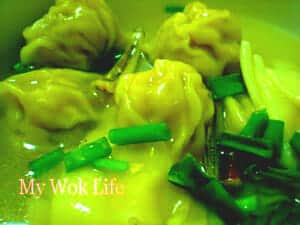 “Scrumptious wonton soup, good for an enjoyable meal, perfect for warming the heart of your loved ones! Check out my recipe and tips to 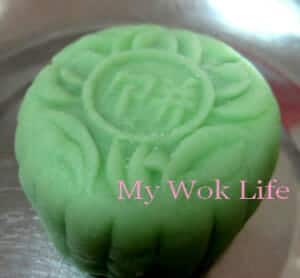