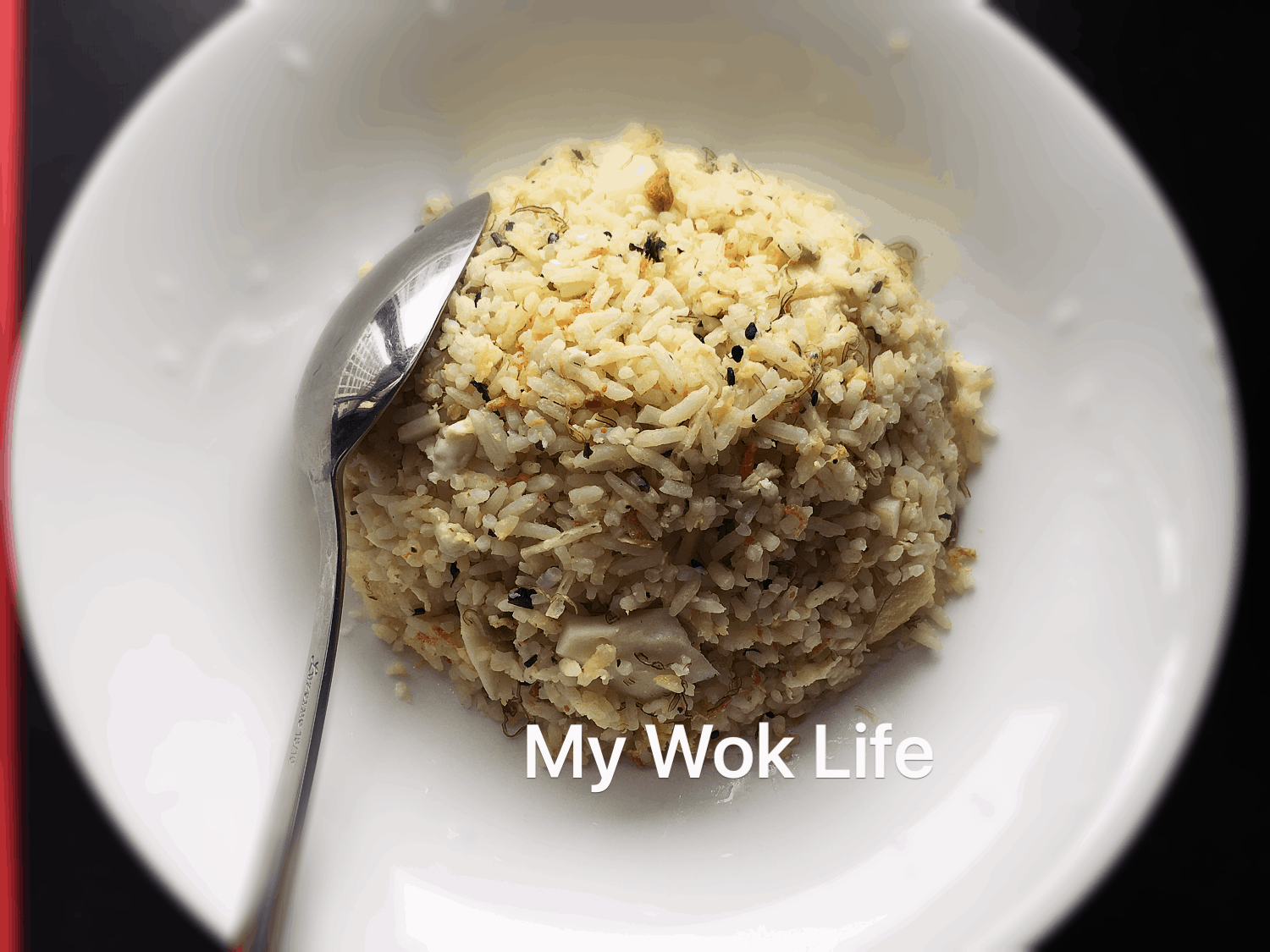 “You are busy, and yet, yearning for delicious & heart warming meal.. here’s something you have to learn up, my simple quick fix rice meal. Not the lazy, but for the smart ones!”

I would say Japanese inventions are brilliant, including their contribution to creating flavorful yet simple food. When we learned to combine the delicious Chinese food with smart Japanese food, what we often get would be delicious smarty food! It’s just a saying, not limited to…. Lol.

Coming back to my golden fried rice, it’s not anything new to cook up this golden fried rice where each grain would be coated with the yellowish yolk to present a plateful of “golden” appearance dish. However, if you ask me, I wouldn’t be bored to add interesting elements to this wonderful goodness, and bring it to a whole new level of tasting. More 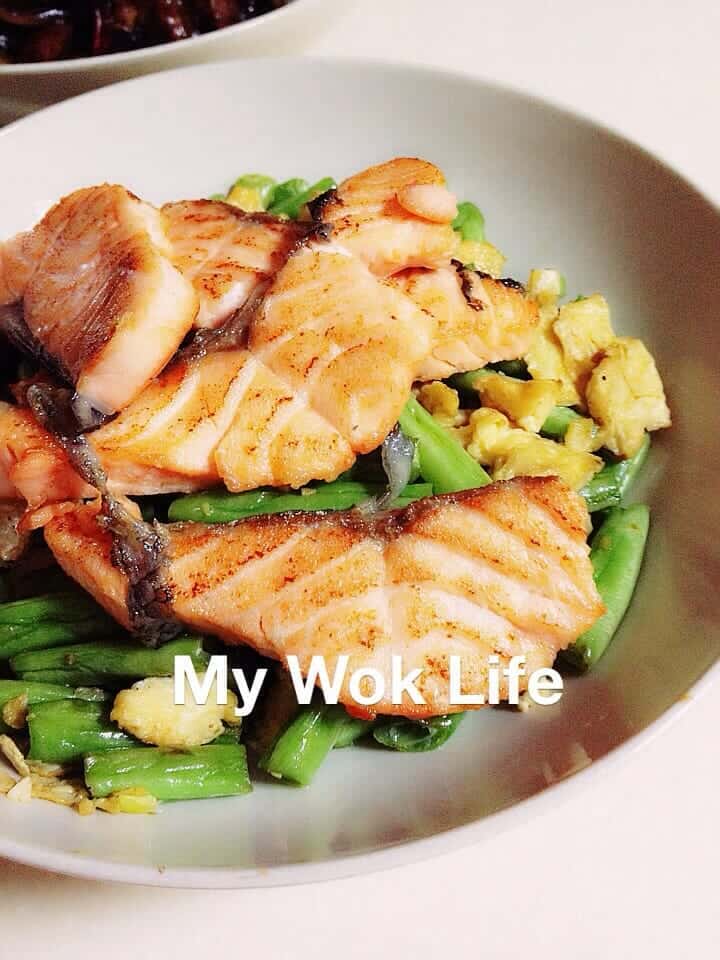 Instant idea to come out with the dish. I had a big portion of Salmon fillet leftover from my son’s cooking as he took only a slice out of the whole fillet for his porridge dinner.

Was pondering a question of cooking our all-time favorite Teriyaki Salmon or not, I had decided to do a new 3-in-1 dish this time. Yea, I always associate Salmon fish with Japanese cuisine naturally, I would not skip in this creation, too. Haha. Use miso paste as the base of the gravy to the dish, I think any dish creation would just never go wrong. :) More 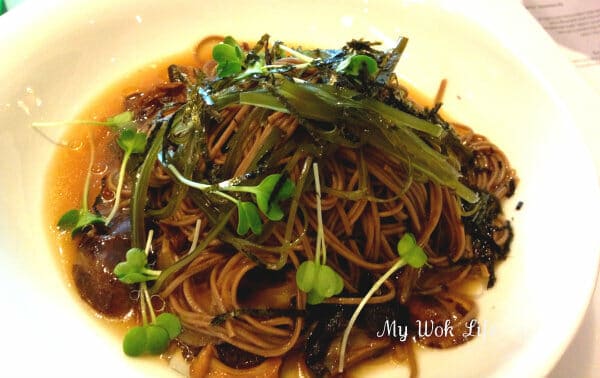 “Oh I miss eating this Japanese Soba which comes with a superior European twist!”

Like many chef experts, including Chef Jason, said, “Good food doesn’t have to be expensive food. Healthy & delicious food is good food.”

This Japanese noodle dish, is suitable for pure vegetarian as garlic wasn’t added to it. More 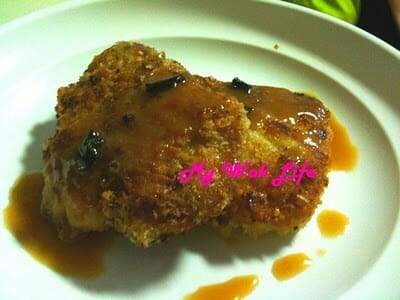 Once my non-Chinese friend asked me why Chinese likes to marinate the meat for ALL sorts of cooking other than BBQ? Will it really make a huge difference in taste? I was speechless. Frankly, I do my marinating for meat, even if it’s to be added in my noodle cooking, fried or soup. Some said it is a must to elevate the taste of the meat… Some said marination is to hush up the ‘meaty’ (or ‘fishy’) smell in it… And, I could tell you that it is pretty much a habit learned from mum since young, more than any other reasons… (smile).

Gradually, I learned to save such effort in some of my cookings. I finally believed that as long as the ingredients are fresh, it is not a must to marinate or marinating for long hours. Once again, I am convinced with the theory. This pork cutlet was not marinated beforehand. It was as simple as just brushing some honey on the chops, I got myself a very flavorsome fried pork cutlet, still! Well, not forgetting that I had my savory Miso sauce topped on it, of course… (chuckles). More 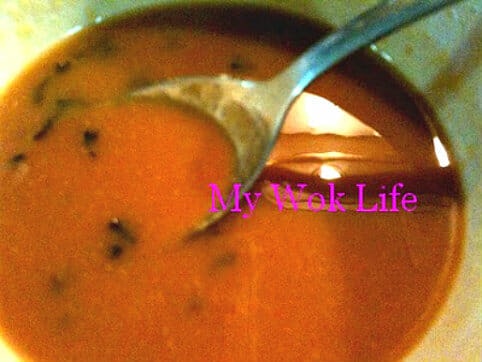 “A savory sauce you can eat in many ways”

Happened to learn a Miso sauce for pork chop cutlet from tv, as I mentioned previously. Happy to adapt its original recipe to my version of homemade Miso sauce! I couldn’t wait to tell you how versatile this sauce is…

I used this Miso sauce as the gravy for my pork chop cutlet. The taste of the gravy went so well with the pork chop as well as the white steam rice I took along with the chop. It is even good enough to eat just the rice with this Miso gravy! More 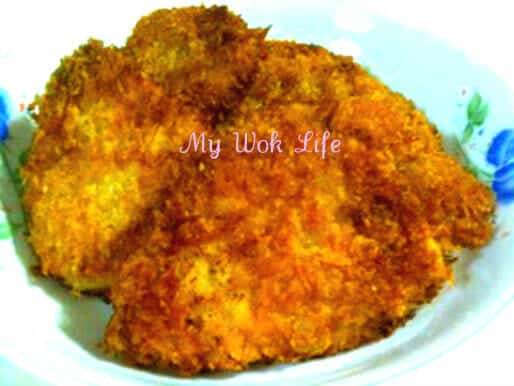 “Simple and quick-making Japanese-style crispy pork chops make your lunch box meal one of the best ever. And, remember to serve it with the savoury Japanese curry gravy!”

Prepare this savory pork chop meal in less than an hour time. And learn my tricks in making successfully crisped and coated chops. It is a 99% success rate.

And because it was home cooking, I tend to make it a healthier dish for my family, so as to save some cooking oil, as I do not like to keep the used cooking oil for cooking more than one time. So, instead of deep-frying the pork chops, I chose to shallow-fry them. It will still be crisped, but I had to fry only one side of the chop at a time as the oil in the pan will not be enough to submerge the entire piece. Just make sure that the chop is not too thick, and shallow frying method will be as good to make the dish a success. More 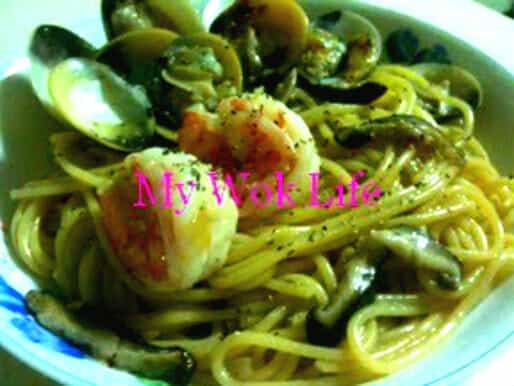 “Spaghetti with fusion cooking style that you will surely love it”

Called this recipe by listing out it’s main ingredients, I was not sure how to name this Japanese-Chinese-Western styles pasta dish. However, this recipe is rustic yet elegant.

This classic homemade dish calls for spaghetti smothered in a hearty chicken stock with a touch of Japanese Mirin. The spaghetti strands drew in the full essence of chicken stock and made it so flavourful and tasty. More 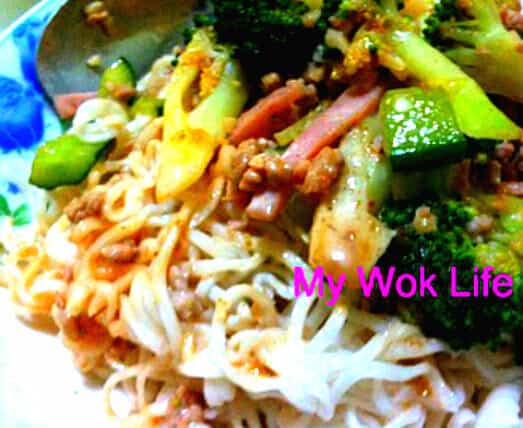 “Japanese sesame sauce noodle dish, simply top with your favourite ingredients to make a good additions to the dish, as desired.”

This recipe came to me from one of my office buddies, Joyce. She loved this noodles dish for its effortless cooking method and the delicious taste of the Japanese sesame sauce, likeable by the family. So, I took her recommendation and got a bottle of the sesame sauce off the shelves. Tried it and I liked it. Most importantly, it’s so easy and quick to prepare as a simple lunch or dinner. A great recipe to busy working class.

The choice of toppings in this noodle dish is variable, as your wish. I thought there were too many elements on my plate as I tried making it a more balance diet by assembling many different kinds of greens and meat ingredients which added up a large chunk altogether. Well, reduce or modify the additions, if necessary, as there is no hard and fuss rule in this recipe.

Simply get a bottle of this delicious Japanese sesame sauce at Japanese products shelf in major supermarkets. This noodles dish can be prepared in a flash! More

Hello! My name is PatriCa, 雪冰. I love food. Cooking is my passion, and it's all about sharing. I want my loved ones to enjoy healthy home-cooked meals. So, that includes you! Come join me on MyWokLife FB Page, Instagram and Twitter. Or, leave me your comments, PM or contact me at mywoklife@gmail.com. Sharing is caring~ Appreciate your kindness to credit or link back if you do use my recipes for any purpose.

You don’t need much of the seasoning. The real f

Mentaiko in any food.. #明太子 is one of the si

Whenever in #japan🇯🇵, other than those local