“Cook whatever you like even the famous local delicacies you have been enjoying only dining out!”

Everyone was craving for 鱼头炉 (“Yu Tou Lu” popular local Chinese soup dish, fish head pot), but we weren’t out to our favorite stalls for this, wasn’t feeling too well to go out for dinner after work.

Not to feel disappointed, I was happy to cook it at home. Taste was 80% alike outside stalls, as my soup wasn’t as ‘sweet’ as those since no msg added, but homemade pot had the most abundance of ingredients. That’s we called homemade…

Oh well, I also do not have any of those conventional Chinese hotpot which uses charcoals to maintain the flame throughout meal, I used my usual shallow stockpot. Happy Call brand. (: 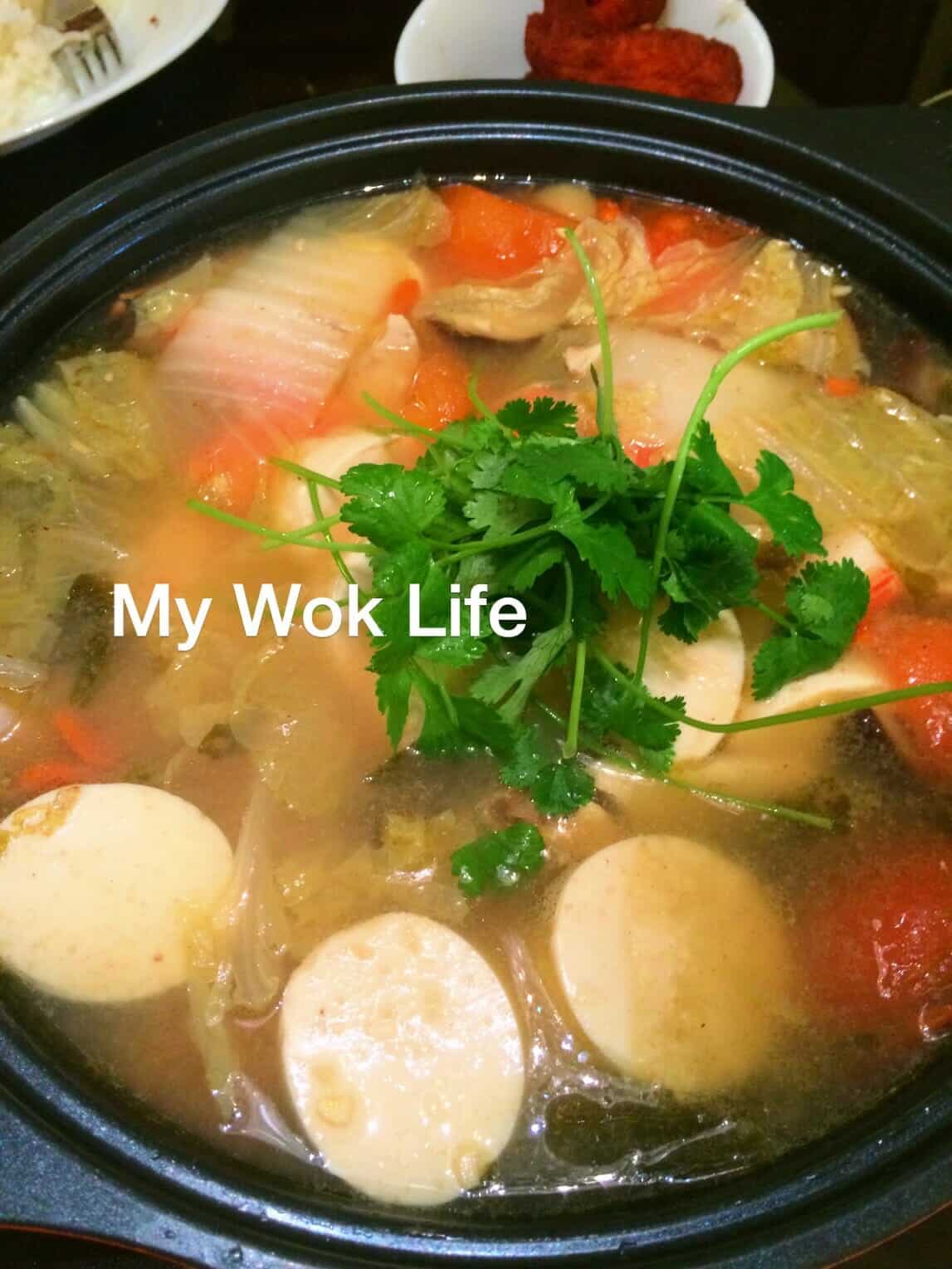 Method
(1) Rinse and pat dry fish meat and head. Season with some pepper and sesame oil. Mix well and set aside.

(2) Pan fry yam stripes till lightly browned and softened. Drain on kitchen towel and set aside.

(5) Add fish, wolf berries, tofu and Chinese cabbages. Continue to simmer for another 15 minutes. Add sugar, salt and pepper during the simmering process. Heat off. Transfer into traditional Chinese hotpot or just serve it direct in the cooking pot. Garnish before serve. Cooked excessively for a meal, I would portion out and store in refrigerator for cooking bee hoon soup the next day. So, this recipe is good for at least 4-5 person.

A portion of everything in counts less than 350kcal, excluding steamed rice.

Tips: Types of fish head/ meat/ slice to be cooked is up to your desire. I liked to mix these two different types of fish. You may choose just 1 type and any parts of fish instead.
* Preserved vegetable, or some packaging a called it pickled mustard, (salty & sour type 咸酸菜) can be found in major supermarkets and neighborhood grocery stores. Look for the word sour instead of salty pickles. If really can’t find, you may use the usual preserved salty vegetable (but must steep for longer time as pure salty type is real saltish), and add 1-2 preserved salty water plums (咸水梅) which usually sold in a small glass bottle/ jar at supermarkets or grocery shops.
* Ikan bilis stock cube is for quick step. If desired, use real ikan bilis (dried anchovies). Rinse few times and place in a steeping bag before adding into the cooking.
* Taste the soup first before adding the right amount of salt as the soup might taste briny enough with the addition of preserved veggies and ikan bilis.
* Add more water, if more watery/ soup preferred. Just play the portions around for home cooked, as long as the basics are there.