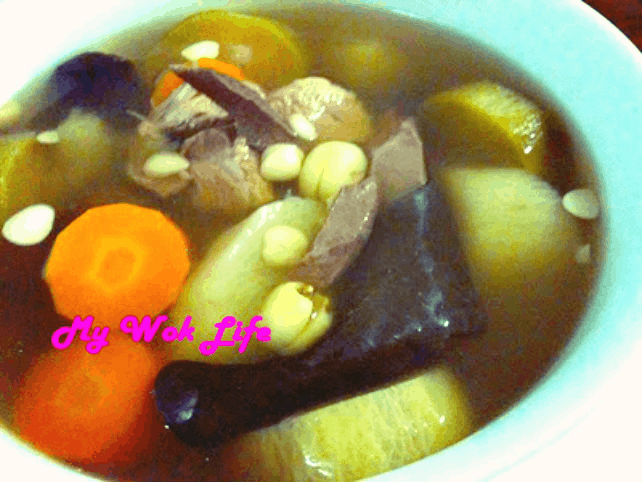 “It’s nourishing and flavorful. Don’t hate the idea of cooking pork pancreas in this tonic soup, try it first. Find out how amazing it could be, to help you to add an experience in your cooking journey.”

[Ingredients Value]
Pig Pancreas:
Offal dishes are greatly consumed and most likeable by Cantonese people. By and large, offal is widely used in Cantonese culinary. From the most common braised trotter to the popular roasted chicken livers, Cantonese people are crowned the dialect group that uses offal in their cooking the most, and that includes soup cooking. 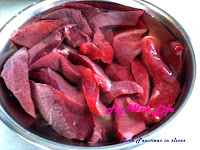 Pig pancreas (pork pancreas), Cantonese people [mainly in Hong Kong] called it, 豬橫脷 (pronounced as ‘Ju Wang Lay’ in Cantonese), and Chinese called it 豬胰 (pronounced as ‘Zhu Yi’ in Mandarin), is often used in soup dishes. Residing in Singapore, you may not be familiar with this offal as it is not commonly consumed here, but the pig pancreas is available at the butcher’s stalls in many wet markets. It’s not usually displayed openly in the front counter/ chiller though. Ask the butcher for it, and most of them would be able to offer.

Just a gentle reminder. If this is the first time you heard about 豬橫脷, don’t be mistaken this term with the pig tongue. It may sound like as if you are referring to its tongue (it is because the long pointy edged pancreas resembles a tongue), but “Ju Wang Lay” refers to the pancreas.

Anyway, I did some online researches about pig pancreas to find out what exactly it offers in term of health benefits. Oh well… It is claimed to serve the function of promoting healthy digestive system, and thus, absorption of nutrient, as well as elimination of body heat, due to its rich enzyme contents. There are also many generic findings, too… Basically, that’s the Chinese culture which believes in the phrase, 以型补型, simply means the same part of the human internal organ will be nourished with the consumption of the same of internal organ of the butchered animal.

“Eee…….” “Yucks…”…. Oh please, don’t give me that kind of disgusted look when you heard about cooking this…pork pancreas. It ain’t that awful, and in fact, it tastes better than pork liver, to me.

It tasted a mild flavor of pork liver and its texture resembles chicken breast meat, with more density. Most importantly, the flavor wasn’t over-powering. By adding it into the soup cooking, its meaty flavor elevated the overall aroma of the soup.

Some other notes on the main benefits of other ingredients/ tonic in my recipe:
* Black woody ear fungus or cloud ear fungus: has crunchy texture and almost flavorless. Usually, it is simply called black fungus. Consumption of black fungus on regular basis helps to eliminate fat deposit in the blood vessel and detoxify liver.

*Wild yam/ Huai Shan: appears slimy before cooked, but it will go off after cooked and turned soft and almost neutral in taste. It is named the ‘tonic’ for men and women in term of reproductive health. It regulates hormones and increase internal secretion. It also contains anti-inflammatory properties and many other health benefits.

*Sweet and Bitter almonds: Usually sold in mixture of both of these almonds. It helps to eliminate phlegm and reduce coughing as well as nourishing lungs. Many claimed that it helps to improve good complexion, too.

Just to summarize, the overall flavor of this soup was rich, but not over-powering. For having so many elements in this soup, it was filled with nutrients, and its taste wouldn’t go wrong for no reason. The radishes added in it, flavored the soup with plenty of natural sweetness, made it so likeable even to the children. I cooked this, more as nourishment, for the health of my complexion, too. 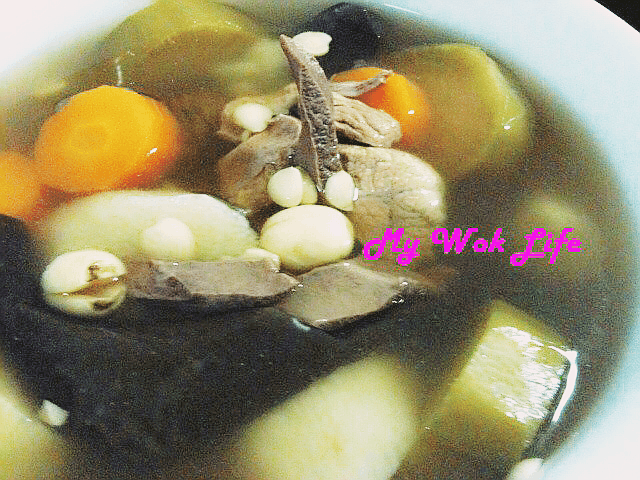 Tips: Cooking time of the pork pancreas is adjustable. The longer the pancreas is cooked, the more intense flavor it emits. So, add and cook the pork pancreas for hours, if you like more intense meaty flavor. For milder flavor, simply cook it for 15 – 30 minutes. The texture of this offal may slightly vary with different cooking duration.
* Pig pancreas/ pork pancreas has mild meaty scent even when it is raw. Simply scour with salt and blanch in boiled water. Heat off before blanching it for just 10 seconds, with lid on.
* Use claypot to do the long boiling helps to retain full nutritional values and maximize the soup flavor, many old generations believed.

Hello! My name is PatriCa(雪冰). I love food. Cooking is my passion, and it's all about sharing. I want my loved ones to enjoy healthy home-cooked meals. So, that includes you! Come join me on My Wok Life FaceBook, Instagram & Twitter. Feel free to comment, PM or email me at mywoklife@gmail.com.
All Posts »
PrevPreviousReminders of MY Week
NextSambal PrawnsNext 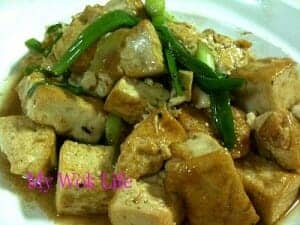 “Check out what are the tips and tricks on making this sautéed tofu dish a success in both taste and appearance!” Hey! I continued to post 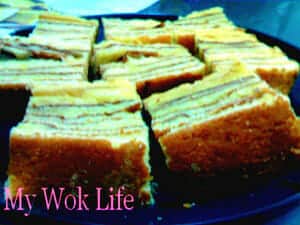 ” Thousand Layer Cake which you can even make at home” Layer cake is an expensive cake to purchase at bakery, especially at those renowned 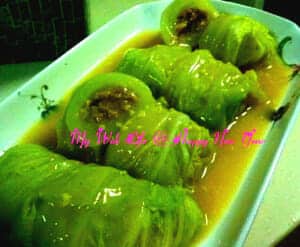 “Simple 3-in-1 Festive Dish, as simple as 1.2.3” Fish, shrimps, crabs, pork knuckle and poultry are important food symbols during the Spring Festival. However, we cannot