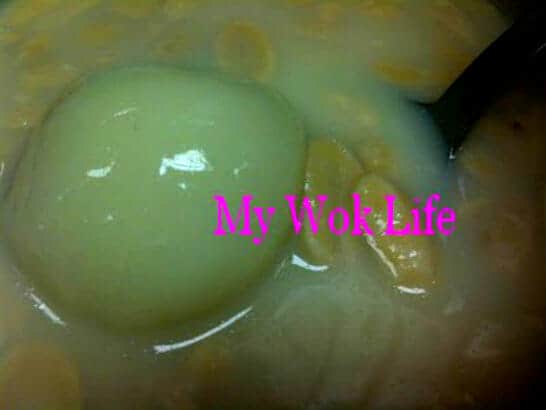 “An iconic Singapore Hawker Dessert made at home”

Not sure why this is called ‘Ah Balling’ or ‘Yah Boling’ in Singapore, but apparently this Teochew dessert soup is so popular and well liked by the people where it has become one of iconic hawker delicacies in Singapore for the past decades.

Since weather here was pretty cooling as it had been either raining or pouring, it might be good if we had some piping hot beverages or food to warm ourselves. The combination of ginger soup and glutinous rice balls is always her favorite, but I was thinking of a change in its soup for this time instead of making the ginger soup for the rice balls repeatedly. This famous Ah Balling just came to my mind…

Initially, I was afraid that the peanuts wouldn’t turn melting soft like what I had from outside stores as I remember it took day-long boiling in slow cooker for softening the peanuts in my lotus root peanut soup which I used to cook, and I wasn’t having such extensive hours to do so for making the sweet peanut soup just for dessert. Luckily, I asked my mum if she had any tricks in this and this was what she taught me here. To steep peanuts in advance, either overnight long, or simply add alkaline solution or baking soda in the steeping water to steep peanuts for just an hour or two. And that will give me the desired melting soft peanut consistency.. Here’s it! :)

Don’t like glutinous rice balls? How about cooking and eating just the sweet peanut soup on its own as after-meal dessert, then?! 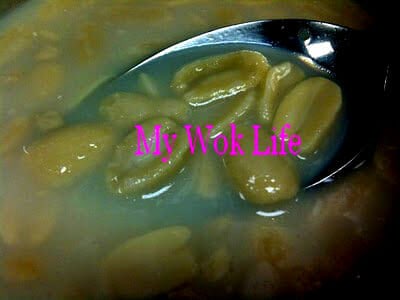 [Ingredients Value] Something about Peanut:
Many thought that peanut is fattening, but you didn’t know that peanut is a good source of monosaturated fats which benefits our health emphasizing on reduction in risk of getting cardiovascular diseases. So, eating peanuts in small quantity regularly or just having it moderately once in a while is good. It may even help in weight management in long run because by eating nuts as snacks, it prevents you from stuffing unhealthy junk food and even helps to curb your appetite for not overeating in actual meals. So, don’t condemn peanuts, ok?

Cook my peanut soup, it’s even healthier with addition of unsweetened soy milk. :)

2) Drain and replace with clean water, continue to soak for another 20 minutes. Repeat step for 1 – 2 more times to wash off ant trace of alkaline residue in the peanuts, if necessary.

3) Bring a pot of water to a boil over high fire. Add in peanuts. Cover pot with lid titled, and bring it to a boil again.

4) Lower heat to low fire to simmer for at least 2 hours, or till peanuts are cooked and softened. Add soy milk and dissolve sugar.

5) Increase heat to medium fire to bring the pot to a slow boil. Add in glutinous rice balls and gently stir the rice balls immediately to avoid sticking. Reduce heat to low fire now and let rice balls cook in the peanut soup till all rice balls float up. Heat off and serve hot.

A portion of my glutinous rice balls with mashed peanut filling (3 balls) in sweet peanut soup counts about 400kcal.

For more options: You may cook the peanut soup with just the plain water or entirely with soy milk, but use low fire for such long simmering to avoid burning of soy milk.

Tips: To shorten cooking time, use pressure cooker to cook the peanut soup (about 45 min to an hour).
* Alkaline solution in bottle is available in baking supplies shops or supermarkets (baking items cell). If not, use baking soda. Or, you prefer overnight soaking instead, but it may not be melting soft unless long simmering time takes place.

Hello! My name is PatriCa(雪冰). I love food. Cooking is my passion, and it's all about sharing. I want my loved ones to enjoy healthy home-cooked meals. So, that includes you! Come join me on My Wok Life FaceBook, Instagram & Twitter. Feel free to comment, PM or email me at mywoklife@gmail.com.
All Posts »
PrevPreviousSliced Sheng Yu (Haruan Fish) and Green Papaya Soup (生鱼片木瓜汤)
NextStir-Fried Chicken with Young Ginger in Asian Soy SauceNext 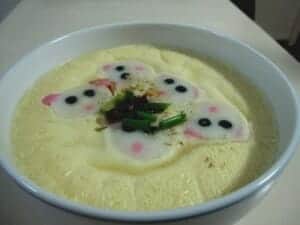 “Add a little bit of surprises to your usual steamed egg” Seriously, it wasn’t easy to cook a perfect steamed egg dish, to me. It 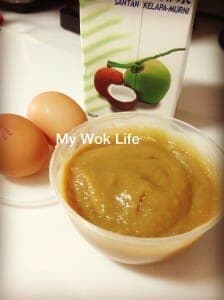 “Quick-cooking aromatic Kaya jam ready in less than 30 minutes.” For those who aren’t staying in Singapore, Malaysia or nearby countries, you might not know 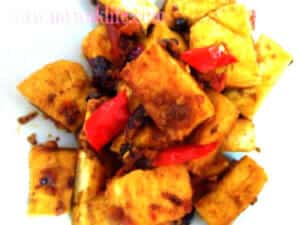