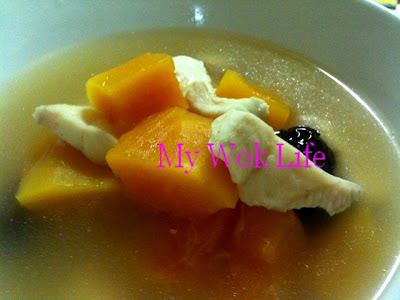 “This is my light and flavorful Sheng Yu soup, without too many elements in it. This is simply an appealing clear fish soup dish that whets your appetite, at the same time, takes care of your health!”

‘Sheng Yu’ (生鱼), the Chinese term for Haruan fish. Haruan is also known as Snakehead Murrel, if it sounds more familiar to you.

In Cantonese culture, Haruan fish is recommended for one who had undergone surgery as it’s believed in the wound healing properties of this fish.

By consuming this fish cooked in soup, the wound of the patient may recuperate even faster. That’s what Chinese always believe.

So, because papa had a minor surgical section to remove a small lump in the arches of his left foot recently, I cooked this ‘Sheng Yu’ soup for him. Here comes my simple home cooked recipe for such soup dish.

In fact, this nourishing clear soup recipe I have is also good to be cooked and consumed by anyone in normal days. For all we want, it helps to promote healthy and supple skin and facial complexion (smile)! Some growing girls even claimed benefiting from its good busting effect, when consumed this soup on a regular basis over a period of time. Well… I admit, I did hope that this will benefit me for my ‘need’ of such effect, but I doubt it will ever take any effect on me for the age I am in now (chuckling)! A little too late for any ‘over-late-twenties’ to rely on such?! Just my joke, in a bad taste.. :p

Oh well~ I still relish on the light and subtle taste of this clear soup, with a hint of natural sweetness yielded from the papaya and red dates that pleasures me a lot. The tint gingery in the soup adds not only the oriental flavour to the palate, but Chinese believed that it also helps in eliminating the excessive gas in our stomach. Such combination of taste makes me feel easy and worry free, for wanting and having this soup dish more. Nearly forget to mention, even the texture of this Haruan fish was so bouncy.

And, for the weight watchers, this soup is low fat! That’s always the plus point for us, isn’t it?! 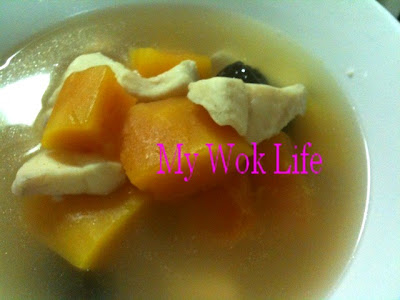 Seasoning for the fish:Pinch of grounded white pepper
Pinch of potato starch

2) Bring a pot of water to a boil over high heat. Place ginger, red dates, papaya and Haruan into the boiling water. Bring all ingredients to a boil again.

3) Then, cover pot with lid slightly titled and lower heat to small fire to simmer for 30 minutes to an hour. Heat off and serve hot.

Most of the time, we’ll use the whole Haruan (smaller fish) to cook this soup, but this time, I used boneless sliced fish fillet from the mature Haruan fish instead of cooking the whole small fish, for eating convenience.

Please eat the papaya, too. The raw papaya is green and hard, but it will turn soft and sweet once cooked long enough in the soup. It’s nice to eat! 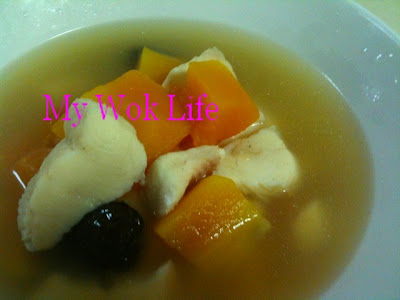 A portion of my Sheng Yu and Papaya soup counts about 100kcal.

Tips: Haruan fish is an inexpensive source of protein we may consume regularly than having regular intakes of red meat types.
* To sprinkle some potato starch on the fish before putting to cook will help to ‘lock’ the taste and to prevent disintegration of the fish slices.

Hello! My name is PatriCa(雪冰). I love food. Cooking is my passion, and it's all about sharing. I want my loved ones to enjoy healthy home-cooked meals. So, that includes you! Come join me on My Wok Life FaceBook, Instagram & Twitter. Feel free to comment, PM or email me at mywoklife@gmail.com.
All Posts »
PrevPreviousBlack Pepper Prawns
Next‘A-Balling’ Peanut Soup Dessert (Glutinous Rice Balls in Sweet Peanut Soup)Next “The nights’re getting colder and colder even in my year-long summer country, Singapore. So, nothing’s better than having a hot hearty soup which easily cooked “Simple remedy to take care of your eyes and throat during the bad hazy weather. Boil and serve this to the whole family, every other 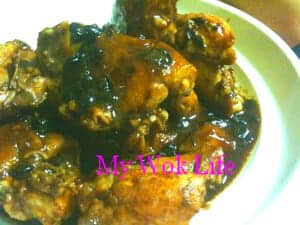 “Something easy and flavorful for a quick-fix dinner. Look at the flavourful black bean sauce, it compliments the steamed rice soooo well!” This dish is similar