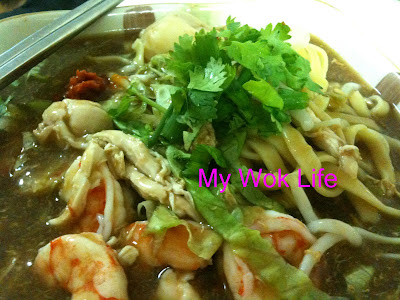 “Don’t mistaken, it’s not the common Lu Mian that I’ve cooked. This is my home ‘secret’ recipe of savoury Fuzhou Noodle Dish!”

I guess most of you heard or tasted Lu Mian (卤面) which commonly sold in many hawker stores and food courts in Singapore. Lu Mian (Noodle in braised sauce) is one of the Fujian (福建) cuisine, if I am not wrong. However, I am not going to introduce recipe of Lu Mian here, my recipe is more a traditional style of similar noodle dish, with its origins from Fuzhou (福州).

So, what’s the difference between Fujian and Fuzhou? I think Fujian is a Province of China, while Fuzhou is the capital of Fujian Province. What I am sure was both Fujian and Fuzhou dialect groups speak different dialects, they are not the same pronunciation at all! Most people in Singapore belong to Fujian dialect group instead of Fuzhou. So, Fuzhou cuisine might not be as familiar as Fujian cuisine, to us. And, my mum’s dialect group, happened to be actually.. Fuzhou. So, I get to learn some special dishes from her/ or grandma (smile).

This Fuzhou noodle dish does not named as Lu Mian, though. It has its own name even though the look and texture of broth were similar (but Fuzhou noodle dish has utterly different set of ingredients for broth and side ingredients used as compared to Lu Mian dish). It’s called 福州淋面 (Pronounced in Mandarin as: Fu Zhou Lin Mian), with its direct translation as Fuzhou poured noodle or ‘pouring on noodles’. I guess it was because this noodle is taken with the thick broth pouring on top, and hence, it’s named as it, in tens, hundreds or maybe thousands years back. 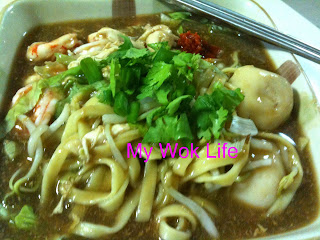 I loved this classic noodle dish, for its subtly rich-bodied broth which creates smooth mouthfeel in the palate. The Fuzhou stuffed fish balls (fish ball stuffed with minced meat) I have added are unique and delicious, too. And, of course, cooking this Fuzhou noodles dish at home yields hearty atmosphere, also, warms the heart of our loved ones who get to appreciate the ‘long lost’ taste of such classic savory.

For more tender, and not soggy bites, remember to blanch and add noodles just before serving.

Method
1) Bring a pot of water (in large deep pot) to a boil over high heat. While boiling, heat wok with oil. Add prawn shells and fry till pinked. Heat off and transfer fried prawn shells into pot of water once boiled (May put shells into a soup bag first before adding into soup). Then, add chicken bone. Reduce heat to low fire, and cover pot with lid to simmer for 1 – 2 hours.

2) In the meantime, get all side ingredients ready. Heat another pot of water to blanch/ cook side ingredients e.g. Bean sprouts, chicken fillet (or thin pork slices), prawns and stuffed fish balls (Fuzhou fishballs). Reserve for later.

3) Return to the simmering soup after 1 – 2 hours. Remove chicken bone and prawn shells. Add in fish sauce and dark soy sauce. Then, slowly stir in plain flour/ corn starch slurry till soup is thickened to the right texture.

5) When it’s about time to serve, blanch noodles, and divide into bowls. Add and arrange side ingredients and shredded lettuce nicely in each bowl. Laddle thick broth into each bowl. Garnish with spring onion juliennes and corriander, and top condiments by the side. Serve hot.

To enjoy better flavour: Mix the condiments together with all ingredients. Toss the noodles to combine well before digging in!

A large serving of my homemade Fuzhou noodle dish (with consumed of thick broth) counts about 500kcal.

Tips: Reason to use plain flour slurry than corn starch to thicken the soup is because the soup thickened with plain flour slurry may keep the broth remained thick in consistency, and will not turn watery so easily.
* Noodle type: This dish supposed to use thick rounded noodles, but it is very difficult to buy that. So, I used Hokkien flat noodle type instead. However, choose any type of noodles, as desired.
* Fuzhou fish balls are available in major supermarkets. It usually comes in vacuum packed of 10 balls.

Hello! My name is PatriCa(雪冰). I love food. Cooking is my passion, and it's all about sharing. I want my loved ones to enjoy healthy home-cooked meals. So, that includes you! Come join me on My Wok Life FaceBook, Instagram & Twitter. Feel free to comment, PM or email me at mywoklife@gmail.com.
All Posts »
PrevPreviousYu Sheng Dish for Lo-Hey Ceremony (鱼生捞起)
NextStir-Fried Baby Kai Lan with Garlic (清炒小芥兰)Next 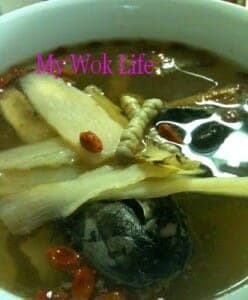 “Nourishing Chinese Herbal Soup, its extensive health benefits to all ages are beyond your imagination.” I had a bowl of Cordyceps tonic soup for lunch

“Simply tasty vegetable broth to reduce your calorie intake” Need something light for tonight’s dinner? My family does. So, I prepared this vegetables broth with

Post & Recipe in English and Chinese (中英食谱) “It’s the same like how I cooked on TV show. Stir-Fried Milk or Steamed Milk Dish, both are