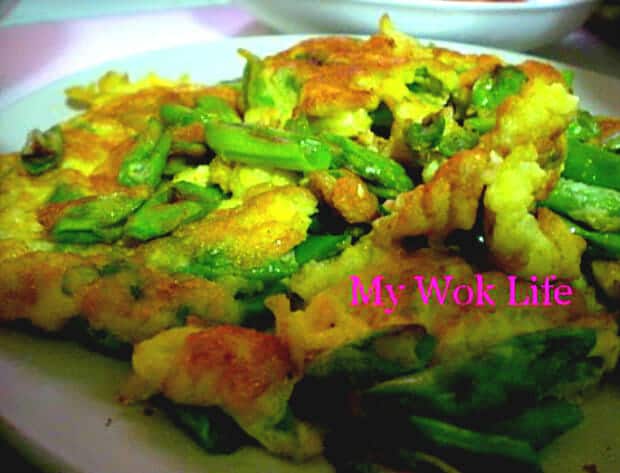 “Fragrant and delicious egg dish with French bean, easy cooking for both the seasoned and beginner cooks”

There are more reasons for me to resist heavy food for now as Chinese New Year is approaching, and further more, I will be going on vacation soon. I’ve to cut down on food amount for the next two weeks in order for me to feel less guilty for pigging out during those two occasions (smile).

I tried to cook light plain rice porridge for dinner more often, but for the sake of other members of the family, I would cook more dishes, but healthier ones to go along with the rice porridge. One of the dishes I could think of, is this fried-egg with French bean (string bean), which imaginably delicious and matched to put them together. Unlike long bean which will be softened after long-enough cooking, French bean, by nature, has its crunchy texture, even after cooked, which makes the biting more interesting. And, without much greenish taste from the bean itself, it will never affect the fragrance of the egg, naturally.

See, my egg dish, too, fulfills the need of balanced diet with the addition of vegetable, isn’t it? And, for its very low in fat nature, this has become one of my reasons for liking French bean so much.

This dish is very easy to prepare and cook, actually. I will also cook this dish even if we aren’t taking porridge, but the steamed rice. Its pleasant briny taste complements both the porridge and steamed rice. Moreover, it will never go wrong with cooking egg dish as it will always suit the taste bud of everyone. All the egg lovers!

1) Break eggs into a medium bowl and add in the listed seasoning. Beat with a fork till all mixed well and lightly foamy on the surface of the egg solution.

2) Heat wok with oil over high heat. Reduce heat to medium fire, add in garlic and stir fry till fragrant. Add French bean and sprinkle some salt. Stir-fry for few minutes, till it appears darker green in colour which means it’s cooked. Then, briefly spread the French bean on the entire wok evenly.

3) Pour egg on the French bean. Let it fry for 1 – 2 minutes to have it slightly set and lightly browned, before stirring it gently with a wooden spatula (or you may just leave the egg as one large piece size instead of breaking it). Flip the egg over to brown the other side of it. Do not cook the egg for too long, in order to retain the moist in the egg. Serve with plain rice porridge or hot steamed rice.

A portion of fried egg with French bean counts about 100kcal.

Tips: For better mouthfeel, try to remove the thin fiber along the sides of the French bean, if possible.
* If you do not wish to have too saltish taste, omit or reduce the amount of salt which to be added in while frying the French bean.