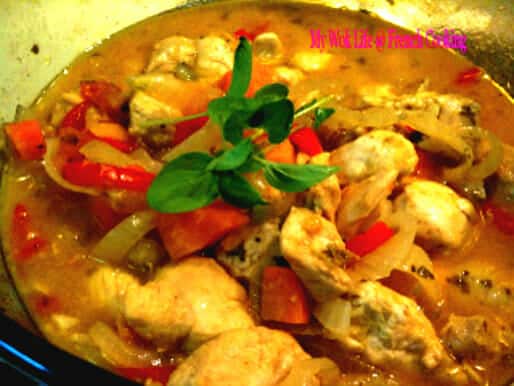 I asked my friends and fans, in My Wok Life FaceBook Club, if they would like to learn some French recipes, and here I am going to share my experience and recipe of simple French dishes, besides those I learnt at Palate Sensations.

For a Chinese cook, like me, to cook French cuisine at home was an unique cooking experience. I enjoyed the process, and the end result (the dish), too. 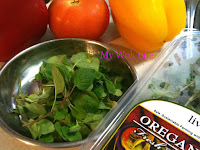 As I mentioned before, French cuisine uses lots of herbs and butter, to bring up the best flavour of French dish, the same goes to this dish I cooked. I liked its buttery sauce, with a hint of white wine. Between oregano and basil herbs, I chose oregano. The fragrance of oregano complements not only fish dishes, adding oregano into this chicken dish promotes the aroma of this chicken dish. But I am sure basil herbs will yield the same effect of another great flavour, too. If you like, try using it, and do let me know, ok (smile)?

I also realised French recipes often use brandy or wine, too. I loved the idea of adding wine (or liquor), too. It makes the dish tastes and sounds so “atas” (Singapore slang of high class) (laughing.. just kidding).

This French dish is a complete balanced dish which you have meat and assorted vegetables with different colours in it. Even for one who does not take bell peppers or onion, he/ she will love this dish and enjoy the vegetables in it as they were cooked till so soft with its irresistably natural sweetness. Not only for the taste, its colourful presentation will make the dish more appealing, too!

2) Heat the oil and butter in a large and deep skillet (frying pan) over high fire. When butter foaming subsides, add chicken fillet/ meat (if meat with skin, the skin side down on skillet surface). Sauté for 3 minutes, or until lightly browned, on both sides. Remove from skillet, when done.

3) Reduce heat to low fire, add garlic, onion, capsicums and black pepper to the skillet, and cook until soften. Stir occasionally to avoid burnt. Return chicken fillet/ meat to the skillet and add wine, tomatoes and herbs, stir to mix well. Increase heat to medium fire, bring ingredients to a boil. Then, reduce heat to low fire to simmer for 30 minutes. Add salt and sugar to taste. Heat off, and serve with steamed rice.

This delicious dish yields aromatic buttery gravy that complements the hot steamy rice so well. Hence, make sure you have some rice to go with it.

Tips: You may use fresh herbs and chop it finely, or chopped herbs in bottle. I used fresh oregano leaves, and chopped it by myself.
* You may lightly coat both sides of the chicken fillet with some corn flour (before sauté), and it is important to sauté the chicken meat (especially if meat with skin) till light browned for better taste and mouthfeel. Mine done not brown enough. So, taste of the meat was a little bit more bland.

Hello! My name is PatriCa(雪冰). I love food. Cooking is my passion, and it's all about sharing. I want my loved ones to enjoy healthy home-cooked meals. So, that includes you! Come join me on My Wok Life FaceBook, Instagram & Twitter. Feel free to comment, PM or email me at mywoklife@gmail.com.
All Posts »
PrevPreviousFried Mock Fish Fillet in Savoury Pineapple Sauce
NextMacaroni and CheeseNext

“Simple and quick vegetarian fried rice with dark soy sauce, for the whole family during weekdays.” Yesterday was Chu Yi (1st day of Lunar March). I 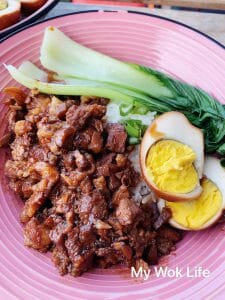 “Easy recipe of a popular Taiwanese dish which you can cook during the lock-down/ CB” “待家时期简单煮，美味台湾美食没烦恼!” Circuit breaker happens in SG…. I lost my freedom😢…. 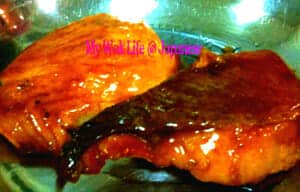 “Easy Japanese recipe of Teriyaki Salmon – 照り焼き鮭” Today’s second day of new year, 2010. I was still in the new year mood, having a new