I am surely not a fan of coconut milk based dessert, but not sure why, I was craving for this Bo Bo Cha Cha the other day. Missed the feeling of chewing the super chewy tapioca flour cubes in this dessert soup! I loved having yam cubes and different types of sweet potatoes altogether! So, I cooked it yesterday. Yummy!

Bo Bo Cha Cha (Bubur Cha Cha) dessert soup is an Asian dessert, porpularly sold at hawker centers and food courts in Singapore and Malaysia. I heard the original name of Bo Bo Cha Cha in Malay words is, Bubor Cha Cha. Bubur means ‘porridge’, and I guess it was due to its thick consistency of soup base resembling texture of porridge.

Coconut milk in this dessert soup has to be the main character as its soup base is completely made of coconut milk! Hence, the choice of coconut milk, from its texture till the brand used, is important, in that sense. The best and most fragrant coconut milk soup base is, of course, cooked completely with coconut milk. However, as you know, I am one of the ‘healthy freak’. So, even for the food I craved for is sinful, I tried my best to make it less (laugh). Yes, I used lots of water (and less coconut milk) in my soup base cooking. Thus, please expect less thick and fragrant consistency in my dessert soup, unless you adjust the thick coconut milk cream from 300 gram to 400 gram, or use just 1200 gram of thin coconut milk without water to cook this. Two methods for your choice! Both are fine, so depends on what coconut milk you could get.

And, here I present… My Bobo Cha Cha Recipe, and the Making of Tapioca Flour Cubes!

**Method (to prepare colourful tapioca flour cubes):
i) Sift tapioca flour if lumpy flour found in it. Then, please tapioca flour and salt into a large mixing bowl. Slowly stir-in hot boiling water and combine well until mixture turns dough-like texture. When mixture is cooled, form it into dough on a well-floured table top.

ii) Flour your palm, and divide dough into 4 parts. Mix each portion with 3 different colouring prepared and leave one portion as ‘white‘ original colour (no colouring added). Knead to combine well and become non-stick dough. Then, roll and shape each portion out into long and squarish thin stripes. Thereafter, dice into small cubes.

iii) Bring a pot of water to a boil over high heat. When boiled, reduce heat, and put in tapioca flour cubes to cook for about 30 minutes, or until all the cubes float up. Texture of cooked tapioca flour cubes should be chewy, and look bright (in colour) with a little translucent appearance.

iv) Dish up and plunge cubes into a bowl of iced water for few seconds. Drain and remove cubes from iced water. Reserve for later.

Method (to prepare complete dessert soup, with thick coconut milk cream):
1) Boil water in a pot over high heat. When boiled, add in Pandan leave, sweet potatoes and yam cubes, and bring them to a boil again. Reduce heat to medium fire, and let them cook for 20 minutes, or until ingredients are cooked and soften with right texture (not too soft).

2) Return tapioca flour cubes into the pot. Add in sugar and stir until dissolved. Lastly, add in coconut milk cream and stir well. Let it boil for another 5 – 8 minutes before heat off. Serve warm or chilled.

ALTERNATIVE METHOD – If you are using just thin coconut milk for this dessert:
1) No water is needed, in this case. Steam the yam and sweet potatoes cubes for 40 minutes, until cooked and soften.

2) Place thin coconut milk into a pot, and heat it up over medium fire. Add in sugar and stir until dissolved. Place steamed yam, sweet potatoes and tapioca flour cubes into the pot, and let them boil for 10 minutes. Heat off and serve. Warm or chilled.

Source of coconut milk fyi:
a) Thick coconut milk cream:
It is usually pre-packed and available at dry goods shelves.

b) Thin coconut milk:
There are different types of thin coconut milk, you may get the liquid types which clearly stated for dessert/ cake making use, available at chilled section in majoy supermarket. Or, those pre-packed powder form which you need to mix with water beforehand. Another type will be the freshest, freshly squeezed from coconuts, and available in Asian wet markets/ markets.

To serve chilled, keep dessert in refrigerator, once it is cooled. This is heavy coconut milked soup, best to keep it refrigerated as soon as possible, for maximum freshness.

A regular bowl of Bobo Cha Cha counts about 560 kcal.

Tips: * If those local orange-flesh sweet potatoes you have gotten are too big, use only halves.
* Purple-flesh sweet potato is not recommended as it will turn the soup into purplish colour instead of cream white colour.
* Thickness/ Consistency of the soup base always depends on type of coconut milk used. If cream type is used with adding of water is needed, adjust the amount of water added to your liking of thickness/ consistency of the soup.

Hello! My name is PatriCa(雪冰). I love food. Cooking is my passion, and it's all about sharing. I want my loved ones to enjoy healthy home-cooked meals. So, that includes you! Come join me on My Wok Life FaceBook, Instagram & Twitter. Feel free to comment, PM or email me at mywoklife@gmail.com.
All Posts »
PrevPreviousFried Kway Teow (炒粿条)
NextFried Mock Fish Fillet in Savoury Pineapple SauceNext 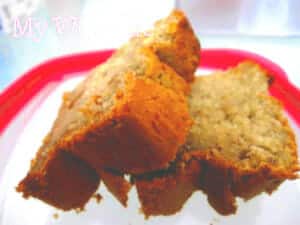 “Easy banana cake with cinnamon recipe which you can bake it, and devour it at anytime!” I had 3 bananas left at home which I 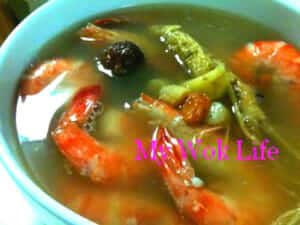 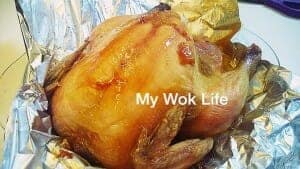 “Simple roast chicken” It’s always a breeze to cook if you have the right equipments in your kitchen. Not giving up my wok cooking, but