Yes, I wanted to cook French cuisine! And that has to do with the movie, Julie & Julia (previously reviewed in this blog posting), which features great French cooking by two Americans. You can imagine how very excited I was to have a chance to attend a cook-off session at Palate Sensations, where I learnt to cook some of the French cuisine featured in the movie.

Palate Sensations Cooking School is the location for this private cooking lesson of French menu which you may see it in the movie. This cooking school is situated at Blk 1, Wesbourne Road, #03-05 (the entrance to this place is via Whitchurch Road, off Portsdown Road and opposite Col Bar). The location might sound very far from where you usually hang out but in reality, it is actually pretty close to the Queensway area and within the Wessex estate, which has many beautiful colonial-styled buildings.

Before I discussed the dishes that I learned to cook during my cook-off, I wish to give a little background about French cuisine in general. If you watched the movie, Julie & Julia, you’ll notice that the French cuisine uses lots of butter! Yes, butter! Well, although we are living in 21st century where a healthy diet comes first, butter is still very much used in French cuisine but probably not as extensively as what it used to be. The 3 dishes that I will share later all used butter in a moderate level.

I love French cuisine because it used a vast usage of aromatic herbs as well as olive oil that liven up the sophisticated French cuisine. Many herbs and other ingredients always show up in Julia’s kitchen in the movie. These herbs and olive combination helped delivering food with a full passion of flavours. It enhanced dishes in a very different way from my usual cooking style.

I always thought Western food should be a lot easier to cook than Chinese food. But in fact, it is not a piece of cake! I admired Julie. It’s never an easy task to cook all 524 recipes in 356 days, but Julie did it, all in her little kitchen! For example, let’s talk about the basic skill of poaching an egg. It might sound easy but in fact, it wasn’t that easy at all. As we seen in the movie, it was a difficult process that Julie had to repeatedly learn to do well before her poached egg was done beautifully (I will share with you on how to do a proper poaching of eggs in the future.. smile).

As I know very little about the French cuisine and those tongue-twisting French food names, and as culinary knowledge is boundless, the cook-off session at Palate Sensations is truly ‘enlightening’ to me. After the cooking session, I have a feeling as if I have stepped into the same chapter of Julie’s cooking experience (winking smile).

The 3 items described below are what I learned from Executive Chef Alicia Tivey during my cook-off session. I would share the exact recipes in my future blog postings as well as some precious tips on French cooking shared to us during the class that I will share with you, too.

And I blogged it, just like what Julie did (smile)!

Bruschetta with Tomatoes (and Basil) 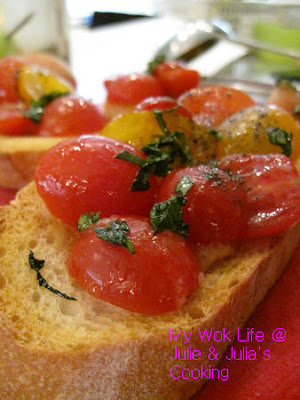 Bruschetta (pronunciation as “Brus_Ketta”) is usually served as appetizer or light bites. To be exact, Bruschetta is Italian garlic bread topped with extra virgin olive oil and salt. The choice of bread could be any long loaf, but since we are on the topic of French cooking, we used baguette as it is one of their food staples (and supposedly the traditional kind of baguette). 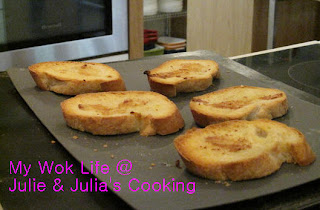 The baguette was perfectly crisped, and the toast is so aromatic! You can choose to pan-fry with lots of butter, it was how Julie fried the bread which appeared really greasy (but supposedly tasted much better where both Julie and her husband enjoyed it a lot), or you may toast the baguette. I chose to toast it as toasting is a lot hassle free and the toast can be done more evenly, without any worries that it might turn out burnt if you did not watch the stove closely enough.

As for the toppings on the bruschetta, although you can also vary the toppings with button mushroom and parsley, but since this is the most classic bruschetta, we will have the tomato and basil as its toppings. We used both the usual tomatoes as well as cherry tomatoes for our bruschetta. For myself, I personally preferred the cherry tomatoes version as it tasted sweeter and juicier, and it’s easier to prepare than using the big tomatoes (chuckling). 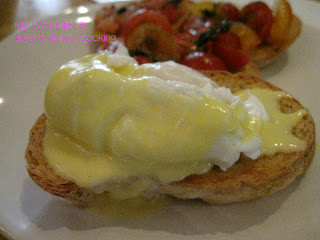 The Hollandaise sauce was actually made by the chef and shared among the students. We watched a demonstration of the making of this sauce and picked up tips and tricks for making it at home. The lemony coloured sauce tasted fabulous. The taste of the sauce was rich but not too overwhelming, and I loved its buttery taste with a hint of tangy flavour created from the adding of fragrant white wine vinegar. This overall taste of perfection complements the pouched eggs!

Yes, talking about pouched egg….. My first egg poaching wasn’t successful. I did not add enough vinegar in the boiling water during the first trial. I felt lousy when I couldn’t get the egg pouched nicely, and when the moment the egg failed to pouch and form nicely, the image of Julie’s disappointed look appeared in my mind, and I could truly understand how Julie felt, when she could not get her recipe cooked successfully. Julie broke into tears when sat on the floor in her kitchen, just like a small little girl who drops her favourite lollipop on the ground (and it creates lots of laughter from the way she reacted on her meltdowns). However, she did not give up at all, and of course, I am strived to get it done, too. My 2nd attempt was good! We then poured the warm (not hot) Hollandaise sauce over the egg we’ve pouched, and ate it with the toasted baguette. 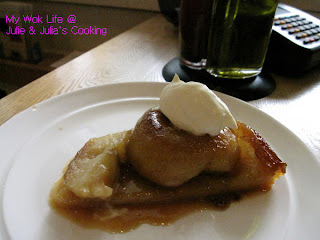 Tarte Tatin (pronunciation as “Tart Tah_Ta”). Tarte tatin is one of the wonders of French cuisine, and this delectable “upside-down” caramelized apple tart surely is the favourite dessert for all. The tastiest homemade dessert I ever had!

In the class, we made a large apple tarte tatin together as a team. We each peeled, cored and halved a green apple each, while waiting for the sugar to be caramelized in a large frying pan on the stove. Then, we put all the halves in the same frying pan to simmer with the caramelized sugar and melted butter. One of us rolled out the ready puff pastry to a thin sheet which to be lined on top of the caramelized apples, and later, brought it to a bake in oven. And why do we call it an ‘upside-down’ apple tart? It is because the whole apple tarte tatin has to be overturned on a serving dish first, before it is sliced to serve. The rounded side of the apples have to face up while the pastry topped on the apples before baked has now become the base.

Did I tell you that it tastes superb?
Yes, it is indeed! I liked the sweetness of the caramel, and it is very sweet. Wait, hang on… It is very sweet, but, to pair it with green apple, it is just simply perfect! The refreshing zesty flavour yielded from the green apples balances the very sweet taste of the caramel syrup, and made it a perfect balanced taste for the palate. I supposed Julie cooked this as one of the recipes in Julia Child’s cook book, Mastering The Art of French Cooking, even it was not shown in the movie (but she did cook many other alluring dessert dishes in the movie… and do notice when you watch the movie on how much did her husband enjoy the cake she baked.. yum, yum). 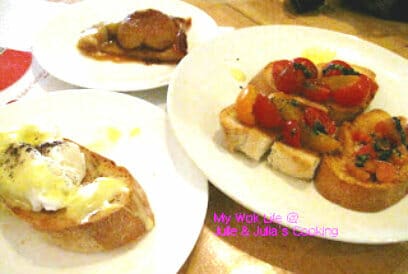 These 3 food items that I have learnt are simply fabulous!

And how do I feel about learning these dishes at Palate Sensations? The chef will actually personally demonstrate the cooking before releasing you to start off on your own. Feeling so fortunate that I was actually having guidance from the chef, first demonstrated and then guided me throughout the cook-off session, while Julie could only did it all by her own, with her self-imagination that Julia Child was beside her, ‘invisibly’ watched and motivated her whenever she cooked, for all the 524 recipes which included those complicated recipes where she needed to bone a duck for boned stuffed duck baked in pastry dish, kill lobsters for Lobster Thermidor recipe, and watch out fire and monitor accurate baking time for Julie’s favourite Julia Child’s Beef Bourguignon.. I was lucky that nothing disastrous turned out during my cook-off, but Julie had her favourite Beef Bourguignon burnt with over baking hour while she felt asleep in the living room. Her devastating moments did not stop there, she ended up with a fight with her husband when her editor guest, who supposed to pay a visit to her house to taste her cooking, did not turn up due to the heavy rain… But yes, Julie’s perseverance in accomplishing her goal of cooking and blogging has brought her to where she belongs, finally.

Begin your French cuisine with Julie & Julia’s food movie! Can’t wait till then, check out their Thoughts on Food now:

There is only a word to describe such tasty experience, it’s “YUM”!

Hello! My name is PatriCa(雪冰). I love food. Cooking is my passion, and it's all about sharing. I want my loved ones to enjoy healthy home-cooked meals. So, that includes you! Come join me on My Wok Life FaceBook, Instagram & Twitter. Feel free to comment, PM or email me at mywoklife@gmail.com.
All Posts »
PrevPreviousNourishing Bird Nest with Ginseng and Rock Sugar
NextRoast Garlic in Olive OilNext 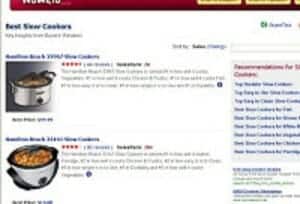 “Wowzio Insights for Effective Online Shopping (for top-notch kitchen products) with Product Reviews” Just came across this website by WOWZIO, offering its beautiful and functional 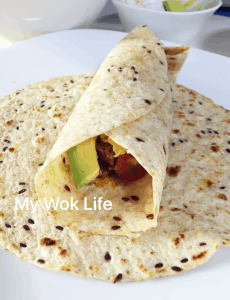 “Delicious and wholesome lunch with healthy multi-grain wrap.” Wrap meals often remind me of Mexico food, but I would prefer having the wrap with an 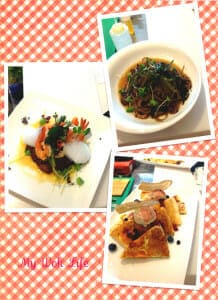 “Optimum nutritious cooking, with heart, passion & TEFAL Pan” Oh well…. Now that I am into cooking healthy & tasty restaurant food, that has to