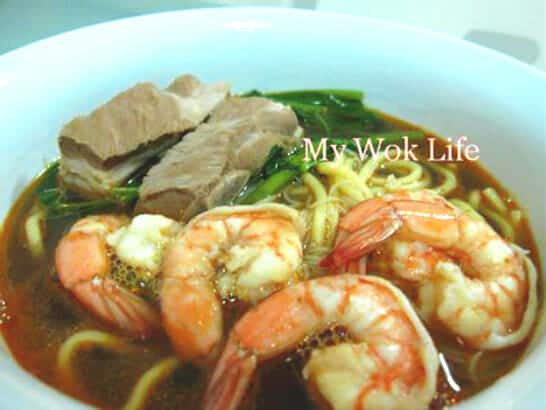 It has been years since I first made prawn noodle soup (see my homemade Prawn Noodle Soup recipe). It is so simple to cook and devour on your very own “home-taste” prawn noodles. Moreover, prawn noodles are definitely healthier choice than having curry laksa noodles.

This time, I cooked a slightly more ‘complicated’ version of prawn noodle soup, with pork ribs added, too. Steps remained, but the soup base was cooked with additional ingredients which makes the soup a special one. It was adapted from recipe of Ms. Yvonne Soh, which has been featured under Taste column of The Sunday Times last week (thanks). The mention of “using cloves, star anise and black peppercorn” in prawn noodle recipe caught my eyes. Never thought that these spices will go along with prawn flavoured broth, so I thought I should give it a try!

Yes, it turned out fabulously. I love the taste of soup with a hint of dried anchovies and spices. The intense flavour in the soup was enhanced by slow cooking method. As I need to work, and wish to cook the ribs till very tender which can be achieved only by hours of cooking. I cooked it first in the wok, and then, transferred over to slow cooker, early in the morning before leaving the house. Goodness! The pork ribs were so tender which almost melt in the mouth. To me, it taste better than the outside stores.

If you ask me if there would anything to be commented, I would say….. 2 teaspoons of brown sugar might be a little too sweet. If you prefer more briny taste, reduce the sugar adding to 1 teaspoon instead, as desired. Other than that, this prawn noodle soup is a near perfect creation.

It might look deceptively complicated to cook, but it wasn’t the case at all. Simple steps with ingredients easily available at the supermarkets or wet markets. You, too, give it a try!

1) Wash and shell prawns with tail remained intact. Cut a deep slit at the back of the prawns to devein, and keep them refrigerated to reserve for later. Then, trim prawn heads. Set aside the heads and shells for use in boiling soup base.

2) Blanch the pork rib by placing the pork ribs in a large sieve/ strainer, and pour hot water over it slowly. Reserve ribs for later.

3) Heat wok with 2 tablespoon of oil over high fire. Place and stir fry prawn heads and shells for about 5 minutes, or until shells turn deep orange and strong fragrant.

4) Reduce heat to medium fire before adding dried anchovies and brown sugar to the shells, continue to stir fry for 3 minutes. Add garlic and stir fry for another 3 minutes.

5) Add water to the mixture, return to high heat to bring to a boil. When boiling, add in star anise, cloves and black peppercorns. Let it boil for 2 minutes before adding dark soy sauce and pepper. Mix all ingredients well, before heat off. Transfer all ingredients together with broth to a slow cooker. Add in the blanched pork ribs, too.

6) Set slow cooker to auto/ low shift. Let the prawn soup and ribs simmer in slow cooker for as long as desired, till you are ready to serve your dinner.

7) About 10 minutes before serving, stir in salt. Scope out and discard the shells, anchovies and any surface scum.

8) Thinly slice/ chop shallots, and fry in 2 tablespoon of oil over medium fire, until browned. Immediately remove from wok, and drain on kitchen towel. *Do not over-fry to allow standing time. Reserve for garnishing later.

9) Return prawn meat from refrigerator, and blanch the prawn meat with boiling water till pinked. Removed and set aside. Discard and change to another pot of boiling water, blanch noodles and kangkong (and bean sprout) for about 2 minutes. Remove noodles and vegetables with a sieve/ strainer, and plunge into a large pot of cold/ iced water for 5 seconds. Then, return to the hot water again for another 5 seconds. This is to let the noodles remain springy and a little chewy (Chinese called it: 过冷河). Drain and divide into 4 bowls.

10) Add cooked prawns and ladle broth into each bowl of noodles. Garnish with shallots (and hot chili). Serve hot. 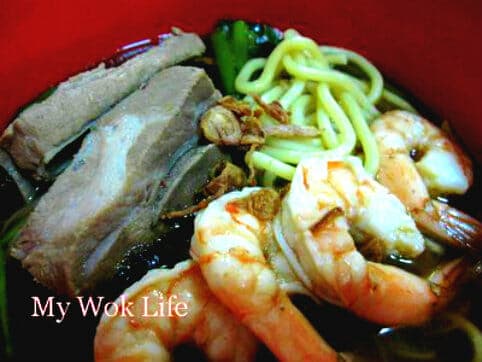 No slow cooker? If you are not intend to use a slow cooker, skip the transfer! Simply remain with wok and let the stock simmer for 1 hour, or until pork ribs are softened.

A bowl of prawn noodle soup with prime pork ribs counts about 370kcal.

Tips: Heads and shells from 24 prawns are needed for the soup base. However, if 24 prawn meat to be consumed are too much for 3 – 4, store the unused prawn meat for future cook or other dishes. Alternatively, “save” prawns shells/ heads gradually over 2 – 4 weeks. if you do not wish to get so many prawns at one time. Store the shells/ heads in a large zip-log bag and freeze it (in the freezer). Simply thaw the shells/ heads 30 minutes before cooking this dish.
* For easy removal of prawn shells and dried anchovies in the broth after cooked, you may first put the ingredients in a disposable soup bag, boil the broth with the soup bag of ingredients.
* Alternate way of handling prawn meat: Prawn meat may also be cooked first, before storing in the refrigerator. Blanch the prawn meat in boiling water till pinked, after removal of shell & head, and deveined (in step 1). Then, store cooked prawn meat in the refrigerator. Cooked prawn meat can be taken out from refrigerator at step 7. Just plunge the required amount of prawn meat in the soup for 30 seconds (to warm it up) before serving it on bowl(s).

Hello! My name is PatriCa(雪冰). I love food. Cooking is my passion, and it's all about sharing. I want my loved ones to enjoy healthy home-cooked meals. So, that includes you! Come join me on My Wok Life FaceBook, Instagram & Twitter. Feel free to comment, PM or email me at mywoklife@gmail.com.
All Posts »
PrevPreviousMeasuring Dry Ingredients vs Liquids
NextTaiwan-Style Shredded Chicken Congee (台湾式鸡丝粥)Next 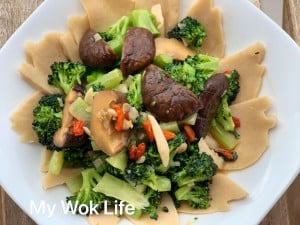 “Vegetarian dinner at home” Yesterday was Chinese Lunar Fifteenth. We tried to keep Lunar First and Fifteenth of the month as our vegetarian days. Since 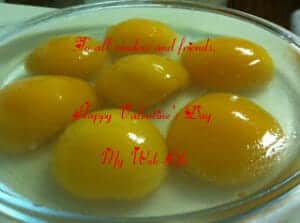 “Happy Valentine’s Day” I would be happy for those who received flowers and gifts from your loved ones. If you haven’t prepared or bought anything 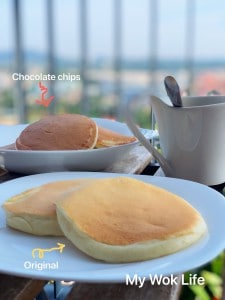 “Easy handmade-from-scratch recipe with almost 100% success rate even for the first timers!” 超简易的松饼食谱，第一次就能轻松地亲手做出蓬松柔软的松饼！ Pancakes are popular and delicious to be enjoyed anytime all-day. I