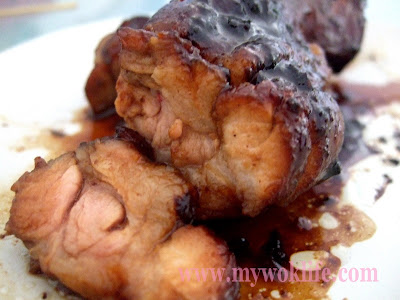 ‘Char Siew’, is actually Cantonese pronunciation. It means ‘fork roasting’. Why is it being called as ‘fork roasting’? It simply refers to its cooking method, long strips of marinated pork meat which are skewered with long forks, and roasted in a large covered oven using charcoal. This is a traditional way of making this dish. Char Siew is one of the famous “roasted flavours (烧味)” in Asia, especially Hong Kong. Char Siew (叉烧) is also well-known as Chinese roasted pork, barbecued pork and Cantonese-style honeyed pork.

The local flavour of Char Siew in Singapore usually appears in bright redish colour. Most Char Siew sellers mix red colouring to enhance redish appearance of this roasted pork. However, I opted out the colouring step as its original colour is even more alluring, to me.

Coming to the Char Siew sauce part, there are so many ready-made Char Siew sauce widely available in the market. The taste of such instant sauce is good, too. However, I did not use the ready-made version. I would like to share my recipe of making Char Siew sauce here because it’s easy to make! My dad, who could cook very well (too bad, he has no time for it), handed down his recipe to me, in fact. I called this as one of the prescious heirloom recipes! It is indeed very tasty and juicy. This Char Siew has a sweet-aromatic aftertaste.

The ingredients for Char Siew recipe are simple and easily obtainable in grocery shop, wet market or supermarket. Most of the condiments used are already available at home, actually. I added Zedoary in my recipe. 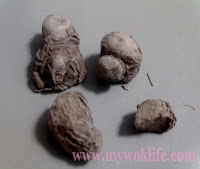 Not sure if you have heard about Zedoary (沙姜), it is a kind of root herb. It is commonly ground into powder and to be used in Chinese cooking such as five spice braised pork meat, and baked chicken, or to be added into curry paste in Indian cuisine. This edible root of zedoary looks and tastes similar to ginger, but Zedoary has mild spice scent. It’s flavour will not be overwhelming. Zedoary normally sold in powder form and small pieces. Both types are OK to be used in this Char Siew recipe. I’ll use any form depends on its availablity at that point of time. We can easily get it from Chinese/ Eastern medical shops, and even Indian spice shop. I like to use Zedoary because it’s mild, and to aid digestion, a relief for colic, and act as its blood purifying agent.

Anyway, do not get worried if you still can’t figure it out, or might have difficulty for getting one. Use ginger juice instead, since it has similar taste to ginger. To make ginger juice, blend or finely chopped 1 small piece of ginger, and then squeeze juice out. Either of these makes delicious Char Siew dish!

For home-cooking, we do not use charcoal to roast it. We may either use a wok/ saucepan over stove or bake in an oven. Let’s see: 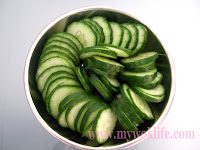 Method
Use stove-cooking:
1) Cut pork into 2 long strips, if not yet. Place them in a large bowl.

2) Combine well with all seasoning ingredients. Dredge pork strips with the seasoning mixture, and marinate for 1 – 2 hours.

3) Preheat a large wok/ saucepan over medium fire, place strips into the hot wok. Keep remaining marinating sauce in the bowl for later.

4) Roast pork strips for 10 min each side, or until both side are caramelized (glazed) and well roasted. Remove from wok.

5) Put marinating sauce into the wok, add some water in order to yield more amount if sauce, and bring to a boil. Reserve it as Char Siew sauce for later.

6) Thinly slice pork strips when they are cooled, and serve with Char Siew sauce, and sliced cucumbers. 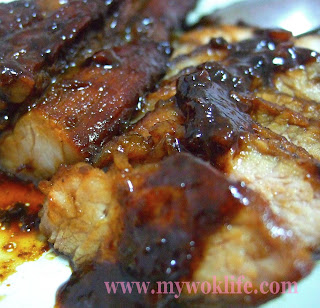 2) Line baking dish with aluminum foil, and place pork strips on it. Do not discard the marinating sauce, but put it in a bake-proof ramekin.

3) Place baking dish in the center of preheated oven.

4) Bake one side for 10 minutes. Turn pork strips over and bake for another 10 min, or until caramelized. Place marinating sauce in ramekin into oven to cook for the same 10 minutes, after flipping over the meat.

5) Remove roasted pork and sauce from oven. Thinly slice when strips are cooled. Serve with Char Siew sauce, and cucumbers. 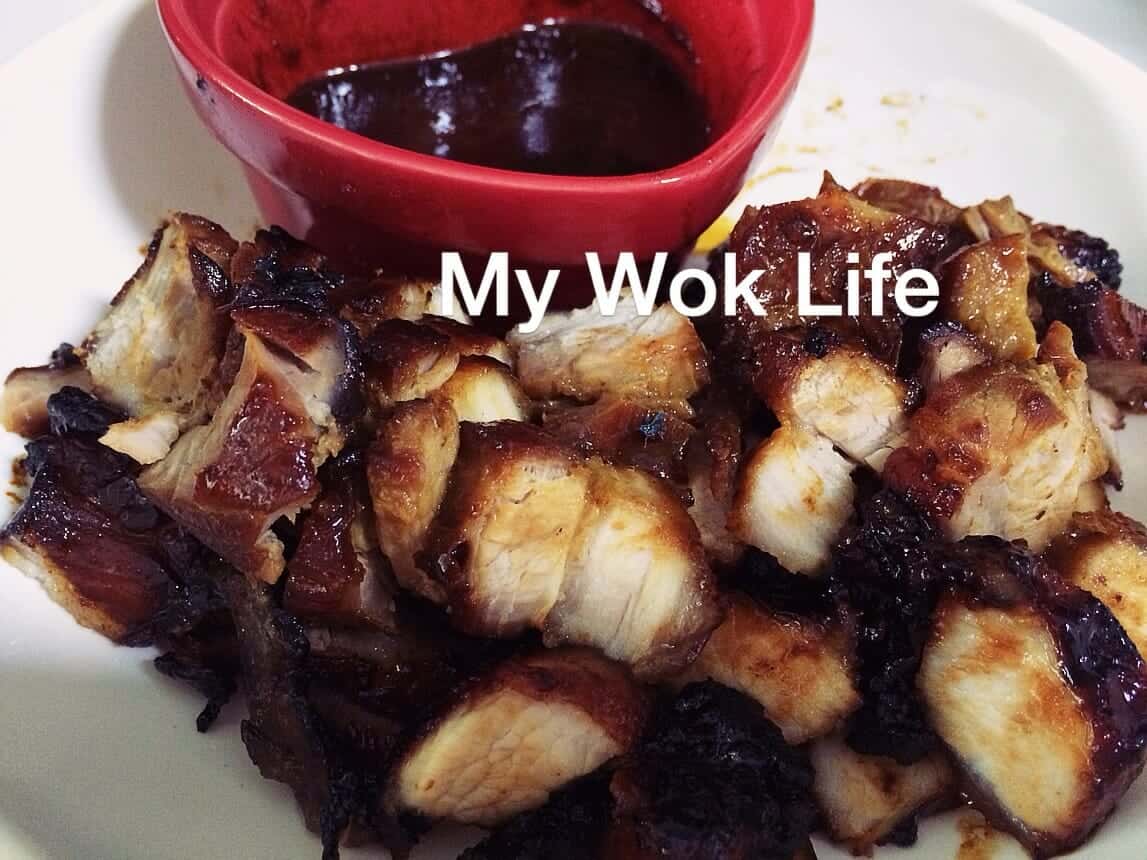 Use Air-Frying:
1) Marinate meat as usual, except for honey. Pre-heat air fryer at 180deg Celsius for 5 minutes. Place marinated meat onto the wire mesh basket and air fry for 10 minutes. Do not discard the marinating sauce, but put it in a baking-proof ramekin or any bowl that can stand heat. Seat aside for later.

2) When first 10 minutes air-frying is done, open air fryer, turn the meat over to air fry for another 8 minutes.

3) Remove roasted Char Siew meat from air fryer. Place the sauce in ramekin onto the same wire mesh basket to cook at 160deg Celsius for 10 minutes. When Char Siew is slightly cooled, slice and pour sauce to serve. [Post Note on August 2014] Air-frying method was recently used. See how the roasted pork was nicely charred. It’s tender, juicy and aromatic. Yes, with air-fryer. Most importantly, it was a hassle free job in the kitchen! Oh, exclude the washing part ya! :D

This dish takes about 20 min (exclude marinating time) to complete and serve. If you are preparing it for next day dinner, marinate pork the night before. Store it in the refrigerator. A delicious dinner of homemade Char Siew awaiting you and your family!

I never forgot to remind you on the calorie-count. It yields 250kcal for a decent portion of Char Siew meat. Shoulder cut pork meat loads you with lesser calorie as compared to belly pork. I like to use shoulder part for its tenderness, too. Of course, some like the fatty part most. The choice is yours.

Tips: Do not heat wok with oil. Place pork strips directly on the dry hot wok, for better caramelizing effect.
*Do not over-roast or bake the pork in order to retain maximum tenderness and juiciness of the meat.
*Dredge pork strips with the seasoning mixes during marination to intermingle meat and the sauce further.
* You may adopt the same honey-brushing method into stove cooking and oven baking as air-frying. This way is the best to prevent easy burning of the main part of the meat. Also to yield shinny appearance of the Char Siew.
* There might be some aromatic meat juice and oil emanated from the roasting and left in the pan/ baking tray/ air fryer, do not discard it. Pour it out to drizzle on the Char Siew.
* You may wish to line baking sheet or aluminum foil on the wire mesh basket to prevent sticking. However, the downwards facing part of the Char Siew might get a little bit wet from the juice retained in the foil. Hence, longer air-frying time might be needed. Extend a couple of minutes longer, then.

Hello! My name is PatriCa(雪冰). I love food. Cooking is my passion, and it's all about sharing. I want my loved ones to enjoy healthy home-cooked meals. So, that includes you! Come join me on My Wok Life FaceBook, Instagram & Twitter. Feel free to comment, PM or email me at mywoklife@gmail.com.
All Posts »
PrevPreviousCooking Tips on Deep-Frying Food
NextNo-Meat DietNext 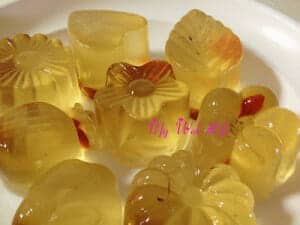 “A perfect summer snack?! Anytime, anyday…” Singapore weather isn’t as hot as before and it rains pretty much lately, but I was still inspired to make these chrysanthemum 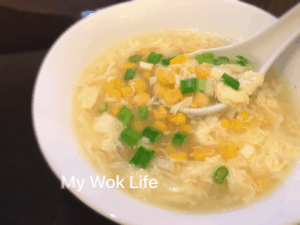 “Super easy and quick soup to settle your dinner on a busy night.” Weekdays were always busy for many families. Dinner during weekdays was best 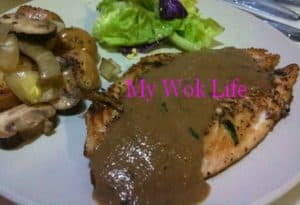 “Grilled fish with Asian mushroom sauce that tingles your taste bud” This recipe was created for my Christmas dinner in 2010. We had chicken chop